At first glance, Ian Murray appears to be the quintessential Hollywood version of an elite athlete and coach. His athletic career as a triathlete includes eleven years on Team USA without a single “DNF” (“Did Not Finish’). He has competed in many ultradistance triathlon events, including Ironman , and , as well as the first-ever off-road Ironman event. His coaching resume is even more impressive. As a USAT Level 3 Coach with the Triathlon Training Series (TTS), he was named Developmental Coach of the Year for 2006 by USA Triathlon. He has coached world champions, movie stars and many, many other promising triathletes. 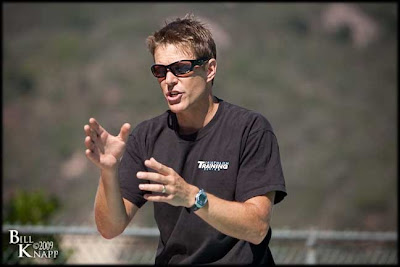 However, what makes truly “Hollywood” is the company he keeps. Not only does he coach movie stars, he married one. Alexandra Paul is glamorous, active in environmental causes and “in demand.” From her starring role in the television series “Baywatch” to her recent appearances in the documentary, “Who Killed the Electric Car,” Paul embodies the public’s perception of a superstar.

So, given his “lifestyle of the rich and famous,” one might expect to get around in a stretch limo, or at least a Tesla electric supercar. Anyone who had such expectations, however, would be disappointed. What is ’s preferred vehicle for basic transportation? It is an old Japanese bicycle frame built up as a fixed gear commuting machine! is living proof that all that glitters is not dependant on foreign oil! I wanted to get inside his head, so I offered him the chance to speak to Cycloculture. His honest, “down-to-earth” comments surprised and impressed me.

A: I grew up in and, as kids, we LIVED on our bikes in the summer time. Initially my bike simply meant freedom to me, it connected me to friends and experiences. It was just a joy... My first bike was a Schwinn Scrambler and what I remember most about it was its demise – I laid it down in the driveway behind the family jeep and, naturally, it got backed over. In grade school I started racing BMX on a red Mongoose that I had on lay-away at Sherpa Sports of months (Sherpa sports was owned by the Grewal family, Alexi won a gold medal in the Olympic road race, Los Angeles 1984). We’d have to drive crazy distances to get to the nearest BMX track to race so I got this wild idea to propose that the City of build the local kids a BMX track. I must have been 12 or 13 when I stood up in a City Council meeting and pitched my idea. I was so nervous that I could hardly read my notes the way my hand was shaking. In the end, they gave us a bit of land behind the city pool, they gave us two days use of a bulldozer and an operator, my step-father built a phenomenal start ramp and we held a ABA sanctioned event soon after.

Q: Is it hard to transition from a lycra-clad cycling god to a "normal Joe" who is riding his bicycle to the grocery store?

A: Not really – the bike is the essential element. It’s just the most brilliant device ever. I’ve ridden in a suit and tie and I’ve ridden 112 miles in a swim brief - it’s far more about the roll than it is about the garb. 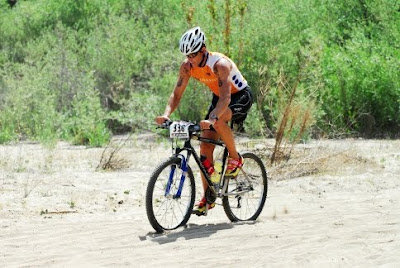 Murray competing in an off-road triathlon

A: I am not a consumer and I don’t own a lot of “things”…. except when it comes to bikes, in that area I’m taxing our resources in a big way and I’d like to apologize to the folks 27 generations ahead.

If I’m just running around town, it’s on my fixie and my fix is a Franken-bike. The current one (we have an epidemic of bike theft on the west side of where I live now, so I’ve been through a few fixies) is a steel C. Itoh (Japanese company that used to build and/or import Bridgestone bikes) that was gifted to me as a rusted, filthy, cob-webbed 7 speed. I stripped it, cleaned it up and rebuilt it as a fix. It’s a hideous mint green but I refused to paint it for one, critical reason. Printed on the down tube is one of those classic, iconic examples of when a bit of English get’s poorly translated – it reads “Tested Finest Bicycle With Precision Mechanism”. LOVE THAT!!! 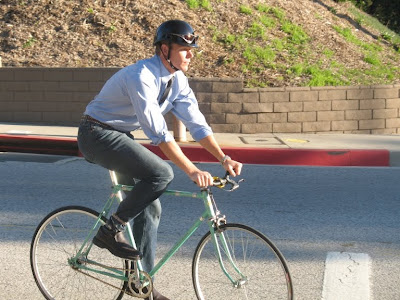 Murray in the real world

In addition to that I own a Litespeed ti hard tail mountain bike, a Trek, aluminum cyclocross bike, a Cervelo Soloist, aluminum road bike and a Cervelo Carbon P2 TT/ Triathlon bike. I train and race on all of those bikes but probably log more miles on the Soloist than the others.

Q: When you are coaching triathletes, do you encourage them to ride their bicycles for their daily transportation needs?

A: When I launch into a coaching relationship the athlete, I spend a lot of time in the consultation. If I see an opportunity for them to commute on their bike I’ll jump on that. Sometimes the athlete is so tight on time – between family, work, swim, run, etc. that I’ll suggest the bike for daily transport just to make good use of time.

Q: When you are commuting or shopping on your bicycle and you see a bicycle up ahead, do you "drop the hammer" and try to catch him/her, or do you get all your competitive urges out while you are training and competing?

A: If there is a bike ahead of me – I’m in pursuit. It doesn’t matter if it’s a homeless guy carrying 5 bags of recycling, a small gaggle of club riders, a septuagenarian, a mother on a beach cruiser towing a kid in a trailer – I’m on the gas ‘til they are collected and dispatched! I’m even more embarrassed to admit that I have this little voice I do in my head when I see another roadie up the road….it’s probably spun out of Top Gun or something of that ilk. I’ll see them and say “bogey…….time of acquisition 2 minutes, 43 seconds”. It’s ridiculous and juvenile. I’m probably not revealing much – I’m sure I’ve said that out loud on training rides with some of my TTS teammates.

Q: How can a cyclo-commuter maximize the health benefits of riding to work?

A: Firstly plan a head – use some of the tools we have now like Gmap-pedometer or Map My Ride to pick a route that is both safe and appropriate to the workout. It takes time to shift our thinking from “what’s the best route” to “what’s the best route via bicycle” – those are two very different things. You have to aim for roads with bike lanes or wide shoulders or few stops. Consider going at an off time so that the volume of traffic is lighter. Consider a circuitous route that, while longer and forces you to leave earlier, is better for the training. In many cities first time commuters are shocked to learn that riding a bike on an errand or a commute takes nearly the same time as driving.

Q: How can we, as a society, change the public image of bicycles from recreational/athletic equipment to vehicles used for transportation?

A: That’s happening and will continue to happen automatically. Two things are forcing it – transportation costs are rising (mainly due to the price of energy) and the density of population is growing. As people continue to get frustrated by inching their cars forward through traffic jams while paying three, four and five dollars a gallon they will take envious note of the smiling cyclists who are rollin’ on by. Current commuters, the early adaptors, can help to welcome drivers onto bikes by riding legally and safely. We gotta obey the laws of the road as if we were driving if we’re going to be loved and respected.

Q: Imagine yourself at age seventy. What role would you like your bicycles to play in your life at that point?

A: I’d like my wife, Alexandra and I to own matching bikes at that age. I’d like us to ride together often in a peaceful setting and observe the world with experienced and satisfied eyes. The bicycle is a great way to take in a new place so perhaps we’ll travel to small towns we’ve never seen and just ride through, absorbing. 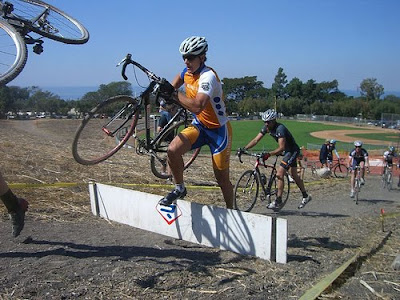 A: Tire pressure means more than anything – I love to hear folks wax on about how their bike “rides with an oaky flavor and just a hint of cassis” (I’m quoting bike guru, Dan Empfield there – he’s very quotable). And, of course, they say their bike rides that way because it’s steel or because it’s carbon or whatever. Or that say it because they ride tubies or a clincher with an unobtainum bead and 550 tpi or some such drivel. It all comes down to tire pressure. You want less vibration from the road? Don’t rush out and blow your white collar bonus on some trinket, just tweak your tire pressure. You want the bike to feel more responsive? Don’t spend all the money you saved from your quinceanera on new cranks, just tweak your tire pressure. In fact, if you’re so hot to shop and spend, then buy a really good pump with a gauge you trust so that you can get super specific about tire pressure. Whew! It’s nice to get that rant out, thanks!

A: I like a mix of low glycemic carbs, protein and fat.

For the past two years I’ve been eating the same meal for breakfast: a quarter cup of oatmeal with a dozen raisins and so much cinnamon that it stirs to look like chocolate. Along with that I’ll eat a half cup of Eggology egg whites with a half an avocado and some sort of funky, mom-n-pop hot sauce whispered across the top. Damn, just writing that makes my mouth water. I hope I never bore of that meal!

It's "World's Finest Tested Precision Mechanism"--as I recall it. But I like Ian! I feel the same way about that quote. It's luscious, and it would be a crime to paint over it! Go, Ian! Great interview. I like this guy (not that it matters). He's right on about tire pressure, too (meaning, I suppose, that I agree with him). He has it figured out. Good job, Forbes!

I love that this guy chases folks on his commuter. My little inner-aggro-monkey always makes me haul ass after other people on bikes. I can't help it, and I'm glad to see I'm not the only one!

Great interview. I love it that was willing to reveal his Top-Gun fantasy.