Sky Yaeger has been leaving her mark on the bicycle world since the 1970s. Her years at Bianchi brought us such industry-shaking models as the “Milano,” the "Pista" and the “San Jose.” She also introduced the world to the first production single-speed ATBs (the Bianchi BOSS, BASS, BUSS, MUSS, DISS ,SISS, SASS, WUSS, GUSS, MUSS and LEWIS). Since she joined Swobo in 2006, it appears that she has been given the freedom to let her imagination and her design sense run wild. The results are wonderful. Swobo’s bikes are unlike anything the world has ever seen. Who would have imagined a galvanized bicycle frame until Yaeger made it happen?

I wanted to understand Yaeger’s design philosophies and motivations, so I asked her to do an interview. I was overjoyed when she agreed. 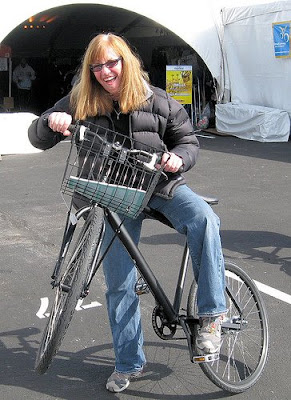 Sky Yaeger getting silly on a Swobo Otis
Photo Courtesy of Richard Masoner and Cyclelicio.us
with some rights reserved
Q: You've been in the industry for a number of years now. Could you tell us a bit about your history with bicycles and bicycle companies?

A: My first 10-speed, as we called them, was a used bike I bought in 1970 for $60.00. I was in sophomore in high school and there was a senior who I didn't really know who had the only other bike in school. Riding a bike was not cool, but I loved the freedom. All my friends had the use of a car, so I didn't get a driver's license until I was in college and didn't get a car until I was 30 years old. I worked in a Schwinn shop in the early 70's and then worked in the famous Yellow Jersey bike shop in Madison during and after college. In the late 80's I was the marketing manager for Suntour USA and when the Japanese closed the company I went to Bianchi USA. I was there for 17 years and made the move to Swobo 2 years ago. 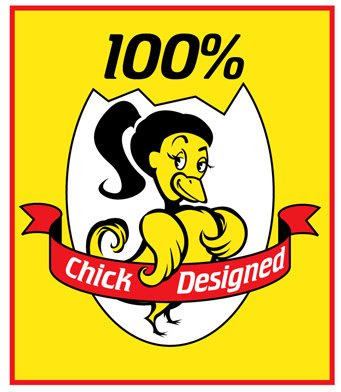 A: It wasn't the goal, but more a result of the model mix, as we have no bikes with derailleurs. We have 3 single-speed bikes and 3 internal hub bikes in the line now. The Folsom has a Shimano coaster brake hub that Shimano Japan is customizing for us, with a longer axle. I like all internal hubs, but the lead times for Shimano are much longer than with SRAM now. The new SRAM i-Motion 9 hub is the only internal hub offered with 9 speeds. The SRAM internal hubs have a more user-friendly cable attachment at the hub, as well as being serviceable, by swapping out the guts, which negates a wheel re-build if there is a problem. Spec'ing high-quality German-made hubs also differentiates our bikes from everything else out there, as we are the only company in the North American market using the i-Motion 9 hub. 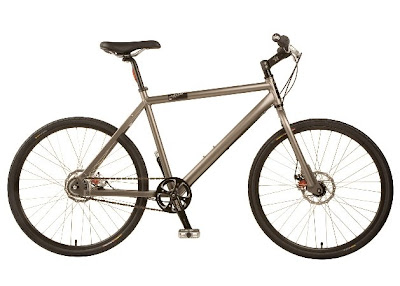 A: Until we can bring an infinitely variable internal drivetrain to market at a weight the roadies could live with, derailleurs are very much not a thing of the past. I have nothing against derailleurs! I can imagine spec'ing a bike with derailleurs, yes. For most urban riding, however, an internal hub bike just makes more sense considering all the benefits. There's a reason why bikes with internal hubs are the most common type of bikes in Europe, where the primary use of bikes is for transportation. 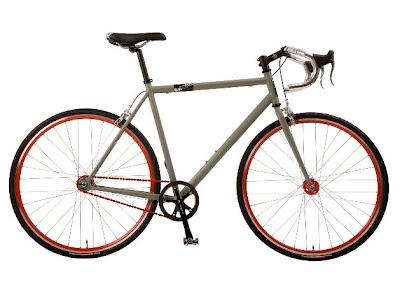 Swobo Del Norte
Q: How many speeds does as average "urban cyclist" need?

A: For most cities with flat terrain, I think 3 speeds is enough. Certainly there are thousands of people riding one-speed fixies in hilly cities like SF, so a lot depends on the rider and the intended use. We're seeing some people who have been riding fixies wanting a 3-speed now, for more utility.

Q: Your bicycle designs are so very different from the offerings of any other company. What inspires them? Is there a design thread which ties all your Swobo bikes together?

A: My education is in fine arts and design, and I get inspiration from everything, but I look to cars and architecture a lot. In most bike companies there are many people involved in bringing a bike to market and it is very rare to have the luxury of conceptualizing a model, designing it from a blank sheet of paper and seeing it through to production. I think of them as a complete, integrated statement. 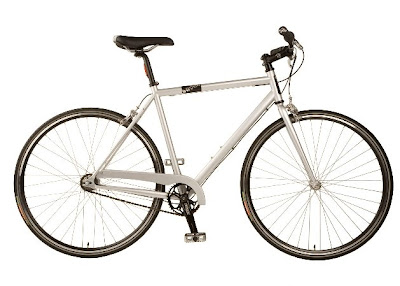 Swobo Novak
Q: I get the feeling you own quite a bicycle collection. Please tell us about some of your favorites.

A: I have a new lugged steel Pegoretti that is quite lovely and rides like a dream. My commute bike is built around an alloy/carbon-fiber cyclo-cross frame that I designed that also rides like a dream, with 700 x 28C tires. The Continental tires on that bike have almost 3000 miles on them without one flat. Another favorite is a steel Dedacciai frame with carbon rear triangle. The important thing is the ride and my favorite is whatever bike I just got finished riding. I like all frame materials, with steel and Ti being right up there. I ride Campy, Shimano and SRAM. 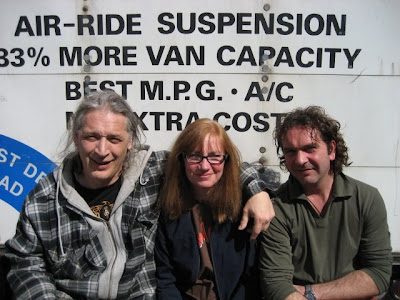 Yaeger with Dario Pegoretti (left) and an unidentified admirer
Q: If you did not have to worry about cost, marketability or any other mundane concerns, what would be your version of "the perfect bicycle?"

A: There is no one "perfect bicycle," but I guess it would have to be whatever inspires someone to get out and ride. One person's perfect bicycle would be another person's nightmare. There are few things in life that are as varied and personal as bicycles and the opportunity to personalize your ride is part of the appeal. I love looking at all the pimped out bikes on the Fixed Gear Gallery site. They have almost 8,000 bikes posted now. If you are talking about what I would design if a million bucks landed in my lap, it would have to be a light-weight belt-driven internal hub urban bike with integrated features like lights and locks and carrying capability integral to the frame. 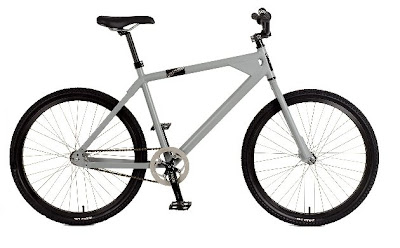 Swobo Folsom
Q: Where do you see the US bicycle market/industry going over the next decade or so?

A: If gas prices continue upward, we're going to see bike sales and ridership continue to increase. Hopefully, the component companies will recognize that more engineering and R&D dollars need to get directed to internal hub technology. I'd like to see real puncture-resistant tires that ride as nice as 120 tpi clinchers and disc brakes that don't rub. I'd like to see all the technology invisible, like a car or a computer, so casual cyclists are not intimidated by suspension components, multiple chainrings and shifters with 4 levers.

Q: Electric bicycle sales are surging throughout the world, even in the USA. Have you considered designing and releasing a Swobo e-bike? 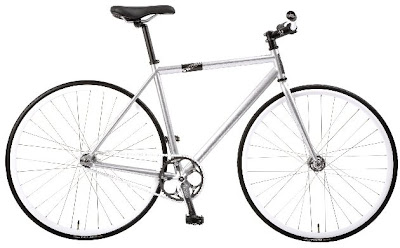 Swobo Sanchez
Q: What else would you like to say?

A: All categories of bikes are good. Every company makes fine bikes. All styles of bikes and all riders are equal. If somebody waves or says “Hi” on the road, say “Hi” back. Don't ride the time trial of your life on the bike path.

A: During the week I love yogurt and fruit with some Grape-Nuts thrown in. On the weekend eggs and bacon, or eggs and sausage.

Hmm...I remember the Pista (but back then it was the 'Eco Pista')in the early 80s -- long before Sky's tenure at Bianchi. Are you sure she's responsible?

I sent your comment to Ms. Yaeger. Her response is as follows:

"Sure thing, they were different bikes from different factories with different frames/forks/components roughly 15 years apart.

The Eco Pista was a lugged Italian track bike, imported from Europe.

I designed the Pista as a modern tig-welded frame with components I had to ask component makers to make specifically for the bike, as in hubs and crank. Taiwan track hubs and cranks didn't exist then.

I wanted it to hit $499.00 retail, because of what as I perceived as an emerging use of fixies in San Francisco, and the challenge was to get the components cheap enough, as there were only high-end European and Japanese track groups available, at that time.

Awesome response. Well, Ms. Yaeger, you rock (not that there was ever any doubt in my mind!) -- I'm sure your Pista design could be considered the cycling equivalent of a "grand slam homer".

I'm loving what you're doing with the Swobo line, and I am sad to see that Bianchi's bicycle line is quickly slipping back into "ho-hum" territory.

Re Yaeger's comment ("If you are talking about what I would design if a million bucks landed in my lap, it would have to be a light-weight belt-driven internal hub urban bike with integrated features like lights and locks and carrying capability integral to the frame."):

Will somebody please give her that million bucks right now?

This is EXACTLY the bike I want to buy tidat! I was just having a discussion yesterday with some "serious cyclists" about how it sucks to have a disparate necessary and optional components bolted or strapped all over every bike, looking like crap, covered in corporate brand names, and falling off or getting stolen when you aren't looking.

We need more bikes with fully integrated (and 21st century) functions and harmonious aesthetics. Is that too much to ask?

Taiwan track hubs and cranks must have existed before the Pista but back then the low-end stuff was almost unspeakably awful. I remember seeing steel fixed gear hubs. There was huge gap waiting to be filled.

"Yaeger with Dario Pegoretti (left) and an unidentified admirer"
the admirer is very similar to Pietro, the assistant of Pegoretti