I first came across BikePortland.org a few years ago when a virtual acquaintance posted a link to a story about a Starbucks manager firing an employee for riding his bicycle to work. Since then, I have had many occasions to visit the website. It consistently brings us real news about bicycle-related issues, and its impact extends far beyond . At times, it is the first news source to break important stories, as was the case last week when it ran an article on the proposed law which would require all cyclists in to wear helmets.

I have communicated with Jonathan Maus, the founder and editor of BikePortland.org, through e-mail and flickr. He is very helpful and insightful. Plus, he is a really nice guy, so I was glad when he agreed to let me interview him for Cycloculture. 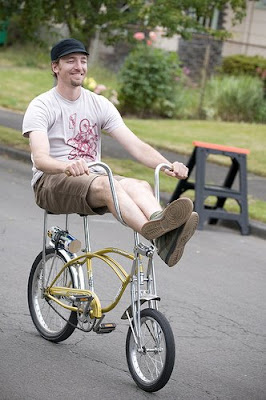 Q: Bicycle culture in seems to be growing explosively. Is that true? What are some of the most impressive developments?

A: That's definitely true. What we have here is the simultaneous flowering of many different aspects of the bike culture – frame builders, shops, racing, non-profits, fun rides, the political scene, everything seems to be hitting on all cylinders. Most impressive is just the sheer amount of bike traffic out on the streets. During peak times, on popular bikeways there are often more bikes than cars waiting to cross intersections. The local racing scene is also very impressive. On any given week, there are all types of events going on... from road criteriums to velodrome action, and even a mountain bike series just a few miles from downtown that pulled in record numbers this year (over 400 entries on Monday nights!). The other thing that continues to amaze me is the number of people building frames and other bike-related products and accessories. I think we're getting close to 20 handmade bike builders in - from icons like Sacha White of Vanilla Bicycles to up-and-coming builders like Aaron Hayes of Courage Cycles, it seems like every other month or so I discover a new one.

Q: Has readership of your blog, BikePortland.org, been growing rapidly as well? Where do you see your blog headed in the future?

A: Thankfully, yes. BikePortland.org has grown a lot in the past 3 years since it was started. These days I am seeing more traffic than I could have ever imagined just a year ago. In the future, I will strive to make the stories even better and I hope it can become regarded as one of the best independent news sources (on any subject) on the Internet. I can also see the addition of some dedicated staff to help me with a lot of the day-to-day tasks and reporting that are starting to get pretty overwhelming. 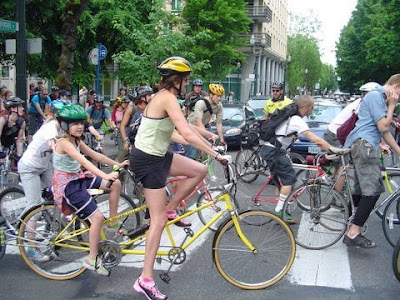 Lots of Portland cyclists
Photo courtesy of Jonathan Maus/BikePortland.org with some rights reserved

Q: According to ForbesTraveler.com, just displaced as the second most bicycle-friendly city in the world. Do you agree with that assessment? What are your thoughts on the matter?

A: I don't really put too much faith into any of those lists, but I think it depends on how you define “bicycle-friendly.” Without a doubt, is far behind (and several other European cities) in bicycle facilities and infrastructure (which explains why 35% of their trips are made by bike and in the number is about 6%). We are also behind several of those cities in how the bicycle is respected by local politicians and city bureaucrats. Relative to the rest of , is fantastic in these regards, but compared to the World Class biking cities, we still have a lot of room to grow. On the other hand, I think has arguably the most exciting and vibrant "bike culture" in the world. When you take in all the grassroots energy, annual events, racing scene, personalities, sub-cultures, etc... there really is no city that compares.

Q: What could do to become more bicycle friendly?

A: We could be a lot more innovative and bold in the type of bikeway treatments we use. – for instance, begin to try some physically separated bikeways. We can also start to allocate more roadway space to bicycles (and away from cars). We could form a task force to comb the city and fix small trouble spots that disconnect our bikeway network. Many of the things could do are not being done because the traffic engineering standards our city planners are forced to work with are outmoded... but that's a national-level problem and not really 's fault. Photo from a recent Portland event, the "Chariot War Death Match"
Photo courtesy of Jonathan Maus/BikePortland.org with some rights reserved

Q: Cycloculture has already spoken to frame builders Joseph Ahearne and Jordan Hufnagel. Who else in should I interview? Note that I am not just looking for frame builders, but anyone doing interesting work in the field of "real world" bicycles. Who in is inspiring you from a bicycle perspective?

A: I've discovered several new bike-powered businesses lately. There's a "Fossil Fuel Free" landscaping business, a women who bakes cookies and delivers/sells them via her trike, a real-estate agent who gives bike tours of neighborhoods and points out local bike-friendly amenities to prospective buyers. On the other end of things there is the amazing . This non-profit has bike summer camps for young kids, they empower lower income folks by teaching them to become self-reliant bicyclists, and they recycle used bikes and give them to kids in need. They've got a new executive director, Susan Remmers, who is really taking them in a great direction.

Q: Tell me a bit about your own bicycles. What kind of bikes do you own? Which is/are your favorite(s)?

A: I have a lot of bikes in my basement at home and a few in my office. Right now, my daily bike is a Batavus trekking bike from . It's got all sorts of bells and whistles like a wheel-lock, full fenders and a skirt/pant guard, hub-generator front light, etc... It's heavy but it's super strong and it practically rides itself. I also have a Bike Friday Tikit folding bike (which is great to have around), a Kona Major Jake cyclocross bike (I raced it a bunch last season), a custom Co-Motion Ristretto road bike (that I got years ago thinking I might race again...but never did), and then I've got a few old Schwinn three-speeds. 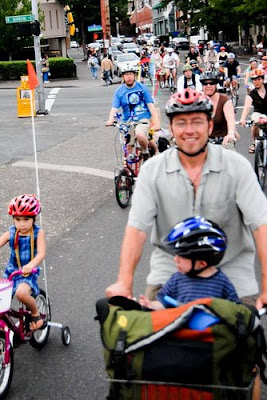 Cycling is a family activity in Portland
Photo courtesy of Jonathan Maus/BikePortland.org with some rights reserved

Q: What kind of riding do you do? Do you travel more by bicycle or by car?

A: Most of the riding I do these days is just around town, covering events and getting to meetings, interviews, etc... I very rarely drive anywhere. We own a mini-van but I only get in that as a last resort (I don't really enjoy driving).

Q: Electric bicycles are sweeping across much of and as a practical way to address some of the limitations of bicycles for commuting purposes (or maybe the limitations have more to do with the riders and less to do with the machines). Millions of e-bikes are being sold across the world, and sales numbers are still rising dramatically. As the bicycle trend leader in the , could be the first city in this country to experience a surge in e-bike popularity. Have you seen any indication that e-bikes might be catching on? What are your thoughts on e-bikes? What is the general attitude amongst cyclists toward e-bikes?

A: The e-bike thing is strange. They've been around for several years but I rarely see them on the roads. I'm not sure why that is, but my hunch is that many people enjoy the simplicity of a bicycle and perhaps e-bikes are a bit intimidating from a technological/logistical standpoint for people. They also lack the distribution network that would put them in front of likely customers (where can you buy those things!?). Another factor is that biking makes you strong and for some people, the added weight of the battery might be annoying because they can ride at a comfortable speed around the city with their regular bike. The other thing likely going on with the e-bike trend is that the market it appeals to – folks that aren't your regular bike commuter crowd – are the same group of folks that are afraid to be out on the roads on a bike. If we had a network of safe, more comfortable bikeways, I think we might see more e-bikers hitting the streets.

Q: You recently reported on a proposed bill which would require all cyclists in to wear bicycle helmets. What are your thoughts on this proposed legislation?

A: I am not convinced of the benefits or necessity of such a law. There are many dangerous things people do on a daily basis but a mandatory law that requires safety equipment is not always the best approach. I am usually skeptical of laws that come from reactionary emotions (like the death of one person) and that are based on personal anecdotes. It's not as simple as saying, "if we can save one life than it's worth it,"... we have to consider the larger context of a proposal like this. And at the end of the day, is there any conclusive research that shows mandatory, all-ages helmet laws actually improve safety? No. Have mandatory seatbelts in cars led to fewer deaths and injuries in cars? No, because the number of cars on the road and the speeds and carelessness with which they're driven have increased. The problem is not that people on bikes need more head protection... the problem is a culture in the that is in love with the speed, power, and "liberty" of cars and is afraid to really deal with the problems they cause in a direct manner. We should focus on making our roads safer, not on padding ourselves against the dangers our roads create. 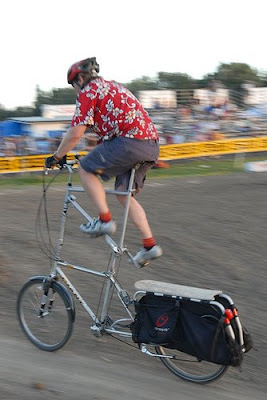 A: Thanks for the work you are doing, Forbes! (Editor's Note: Aw, shucks. Thanks!)

A: Coffee and toast with avocado and eggs over easy.