NPR Does a Nice Piece on Electric Bicycles

NPR's "All Things Considered" just ran a very nice story on electric bicycles. The story focused on interviews with "normal folks" in San Fransisco. Aging baby boomers tell tales of conquering hills which would have been impossible for them on regular bicycles or of getting startled looks from fit, young bike messengers as the "old folks" zip past them.

The piece also pokes a bit of fun at bicycle shop employees with shaved legs who "Look at us in pity and say 'No, we don't have anything like that,'" when asked about electric bicycles. 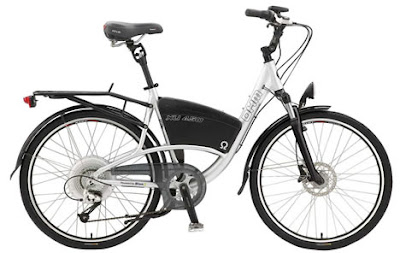 An e-bike by "OHM"
This is another good example of the positive media coverage bicycles and e-bike are receiving these days. Bravo NPR!
Posted by Forbes Black at 8:44 PM