Pedicab Companies Use the DNC to Test the Market

Yesterday's Wall Street Journal (WSJ) ran an interesting article about pedicabs at the Democratic National Convention (DNC). The author, Kelly Spors, discussed historical precedents for using large, public events like the DNC to "test the waters" and get s0me data as to whether an idea is likely to catch on with the general public.

"Ice cream cones and X-ray machines were popularized at the 1904 World’s Fair in St. Louis. Will 'pedicabs' – those passenger carts pulled by bicycle riders – be mainstreamed by the 2008 Democratic National Convention in Denver?" 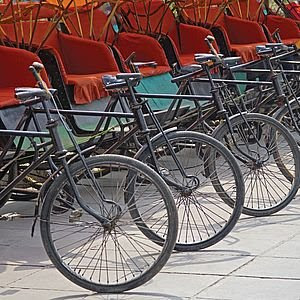 Pedicabs, a.k.a. "bicycle rickshaws"
Photo from the Wall Street Journal, by Getty Images
A large element of the current "Democratic message" revolves around environmental issues, so the DNC should provide pedicab operators with a very friendly customer base. Photo opportunities of delegates spurning gasoline-burning cabs in favor of pedal-powered transportation could be valuable to those seeking to enhance their "green" image. If pedicabs can operate profitably at this venue, entrepreneurs may be encouraged to open pedicab businesses at other locations.

After yesterday's rant about the recent WSJ article on the lack of recreational bicycling in China, I was glad to see them redeem themselves with this positive coverage of bicycles (okay... tricycles in this case) as a practical mode of transportation.

Stephanie Simon, also working for the WSJ, wrote a related article.
Posted by Forbes Black at 8:24 AM