That trend may be reversing itself, or at least stabilizing. Taiwan has been successful in establishing itself as a relatively low-cost source for mid-to-high end bicycles. Quality controls in certain Taiwanese factories meet or exceed those of factories anywhere else on the planet. The quality of Chinese-made bicycles has improved dramatically over the last several years, and mainland China is increasingly proving that its factories can accomplish relatively complex manufacturing processes. However, most experts in the bicycle industry still believe that Taiwan has more capabilities in terms of building top-tier bicycles. 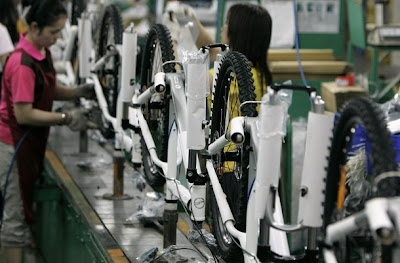 An assembly line at Giant Bicycle's factory in Taichung, Taiwan
Photo from Reuters Pictures
The recent surge in commuter bicycle sales in the USA and Canada may have contributed to the 19% increase in Taiwan's bicycle exports to North America during the first 6 months of 2008. Sales numbers grew from 325,745 during the first half of 2007 to 386,671 during the same period this year. As consumers look for bicycles to replace their gas-guzzling automobiles, many are willing to pay higher prices to purchase bikes that are attractive, efficient and accessorized to meet their commuting needs.

This trend is described in detail in a recent press release by the Taiwan External Trade Development Council (TAITRA).
Posted by Forbes Black at 8:24 AM