If You Build It, They Will Ride

Adam Voiland wrote an article entitled, "Bike Commuting By the Numbers" for today's US News and World Report. It describes the success that certain European countries have had in encouraging transportation by bicycle rather than by car.

Some interesting statistics from the article:
- 37% of trips under 2.5 kilometers in the Netherlands are made by bicycle
- 0.02% of trips to work in Kansas City, Missouri are made by bicycle
- Motorists in the Netherlands and Germany are legally responsible for collisions with children or elderly people on bicycles, even if the cyclist is not obeying the law
- 1.1 cyclists are killed per 100 million kilometers cycled in the Netherlands, while 5.8 cyclists are killed in the United States over the same distance cycled
- One third of cycling fatalities in the United States involve alcohol use by the driver or cyclist 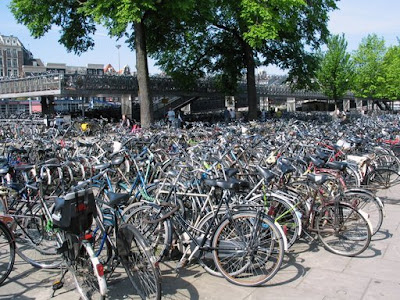 A bicycle parking area in the Netherlands
The article states, "Transportation planners in the Netherlands, Germany, and Denmark have invested heavily in bicycle paths and lanes, discouraged the use of cars, and gone to great efforts to protect the legal rights and safety of cyclists." The results of these efforts seem definitive. When a country makes a sincere effort to encourage cycling as a form of transportation, it works. When a country allows oil companies to dictate transportation policy, we get what we should expect.
Posted by Forbes Black at 12:51 PM

I dont know if i'm more depressed or motivated to make changes here in the US... seems like a relentless uphill battle some times; luckily hills are what make great cyclist.

I think that number of deaths per 100 million kilometers traveled is wrong. Because if that was the case than estimate an average commute by bike is 4 kilometers and their are an estimated 1 million bicycle commuters in America it would mean that every 25 days about 6 bicyclists are killed in America. That might be right, but it still seems high. Great information though thanks.

Though not quite as well organized or on the same scale, here's a photo I snapped this summer of the sea of bicycles parked outside the Hbf in Heidelberg, Germany:
http://tinyurl.com/64kd2d

I think though, that since Heidelberg is a college town, these are college bikes locked up at the train station while their owners are at home or on holliday. Most looked like beaters, but still better than our ubiquitous department store junkers.

That being said, Germans love getting around on their bikes. My observations may be slanted though since I only got to be there for the middle of summer during nice weather. No idea how winter affects cycling there.

there´s no reason to be depressed.
most of the decisions needed for a bike friendly town are made at this "townlevel" of administration. that´s why "bikefriendlyness" is kinda different all over germany. some (most) really suck for biking unless your are practicing one of those bike courier madass driving styles.
but of course there are some bright examples like Muenster ( the smaller the town the better).
if you want to have a bike friendly city/town start at this level of administration, dont wait for the feds or state. i guess the actual gas shock opens a wonderful window of opportunity for... a change ^^.