Not only are more people bicycling to work these days, but more media outlets seem to be paying attention to this trend. If this keeps up, cyclo-commuting could become a mainstream affair in American society in no time!
Jane Whitehead's recent article in the Boston Globe demonstrates both of these trends. In this piece, she chronicles the commutes of several Boston-area cyclists while touching on some of the numbers indicating a substantial increase cyclo-commuting over the last few years. She also talks to various people in the bicycle industry about sales increases in bicycles and accessories, increased demand for training in bicycle maintenance, advocacy efforts, etc. It is an informative, well-written article. 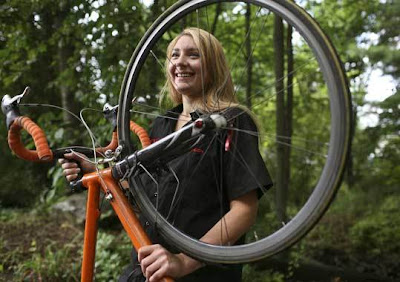 Jocelyn Gaudi of Medford, MA cyclo-commutes 20 miles each day
Photo by Pat Greenhouse/Boston Globe Staff
But the article is also important above and beyond its specific content. The more positive media coverage is given to increases in cyclo-commuting, the more acceptance bicycles could gain within the American commuting population. Whitehead's article presents cyclo-commuting as healthy, safe and fun. It may act as a wonderfully inspiring piece to someone who has been considering ditching his/her car, but needed an extra shove to turn intentions into actions.