In an effort to move away from oil-dependent vehicles, the Australian Post is considering replacing some of the motorcycles used by letter carriers with electric tricycles.

A recent article by Rhys Haynes in Australia's Daily Telegraph states, "Yesterday an Australia Post spokesman said the move was a way of 'searching for initiatives to make its fleet more energy efficient' and trials would include several new modes, including electric bicycles and tricycles."

The electric tricycles under consideration are sold by Australia's Electric Bicycle Company. They cost 2000 Australian dollars (roughly 1830 U.S. dollars)/each and can carry up to 150 kg (331 pounds). 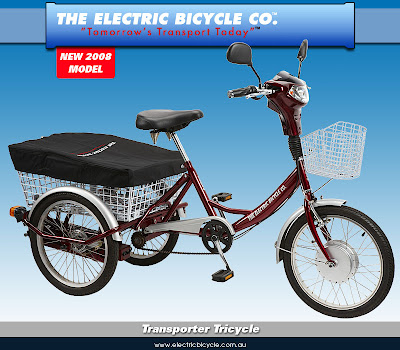 The tricycle Australian postal officials are considering for use in mail delivery
The Australian postal union counters that the main goal of the switch would be to open up certain mail delivery jobs to people who do not have motorcycle licenses. Whatever the real reason for the change, Cycloculture says, "Good on ya'!" to all those supporting the proposal.
Posted by Forbes Black at 9:54 AM

Interesting but totally wrong.
Australia Post tried a couple of Electric Bicycle Company trieks and found them totally inadequate. They then went to Electric Vehicles Pty LTd (EVS)www.evehicle.com.au and found what they were looking for. Contracts for ongoign supply by EVS have now beensigned for both POWERPED e-trikes and POWERPED EVO kits fitted to Aussie Post Bikes.