Are Shared Lanes for Bikes and Cars a Good Idea?

An article by Christopher Smart in yesterday's Salt Lake Tribune described a pilot program in which Salt Lake City will designate certain traffic lanes as shared bicycle/automobile lanes, or "sharrows." Per the article, "The green lane would carry the white bicyclist's symbol and chevrons (markers shaped like an inverted V) to alert motorists to expect to share space with two-wheelers."

The idea behind sharrows is to maximize available space for both bicycles and cars while alerting drivers that they should drive cautiously and expect to see cyclists in their traffic lanes. Tim Harpst, director of transportation for Salt Lake City, states "We want bicyclists out in the center of the lane... We want them to take ownership of the lane." 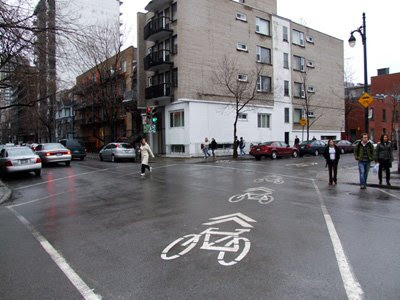 A "sharrow" in Montreal
Photo from UrbanPhoto/Christopher DeWolf
The article states that sharrows have been implemented successfully in cities in Europe and North America, but I still have reservations. Perhaps cyclists could share traffic lanes safely with Smart cars and 500cc Fiats in Europe, but the thought of sharing a lane with clueless drivers in Escalades and Suburbans scares the dickens out of me. In fact, I have noticed that any time I see a "Share the Road with Cyclists" sign on a street or road in Los Angeles county, it can be taken as a warning that things are about to get really dangerous for folks on bicycles. These signs, put up by transportation officials, are generally placed where bike lanes end in heavily trafficked areas or where there is no shoulder whatsoever.

Do not misunderstand. I am not dismissing the idea of sharrows. I am adopting a "wait and see" attitude until we know whether they are a real solution or just a "feel good" idea that does not have a beneficial impact on cycling safety.

I deal with shared lanes regularly here in Santa Cruz, one in particular that transformed a scary, narrow, twisting downhill road from a potential disaster to a pleasure to ride.

I'm experiencing an increasing attitude of acceptance and support from motorists as I ride the streets and bike lanes of Santa Cruz, Maybe just my imagination fueled by hope.

I wish people would learn to ride a bike properly or teach it instead of expecting some paint to do the job.

But... I can't say I hate the idea.
They are less restrictive than bike lanes, and more suggestions and reminders than anything else.

I agree that further observational data and analysis is needed.

All lanes are shared lanes (unless you have some that disallow cyclists?).

Highlighting the fact that cyclists might be around surely works best for areas where cyclists are not so common, but still likely.

Training cyclists to take the whole lane (whenever required) and training car drivers to expect that and to overtake properly are surely more effective?

I appreciate your reservations, but do not share them. I agree with you that there are drivers out there who believe that all bikes belong on residential neighborhood sidewalks. I have had run-ins with such, but they have been rare. The problem, as you state, is ignorance. Many drivers just do not know what the law says about sharing the road with bikes. (A lot of cyclists don’t know either, as can be seen by observing by all those riding ill-fitting Big Box specials opposing traffic).

Share designated lanes would provide an education to drivers that they would not necessarily get any other way. You do have a valid point that not everyone will get it. This is demonstrated by the number of cyclists that still ride facing traffic in bike lanes that have arrows showing the correct direction of travel.