According to an article by Yoon Ja-young in the Korea Times, there is a big push underway in South Korea to get accident insurance coverage for bicycle riders.

The article states, "Cyclists have been marginalized from insurance coverage.... Bicycles are categorized as cars according to traffic law, and are subject to the same regulations as cars in case of accidents. If a cyclist collides with a pedestrian on a sidewalk or bicycle path, for example, the cyclist is liable. Cyclists might face criminal charges as they are not insured. Consequently, an increasing number of cyclists have been calling for insurance products." 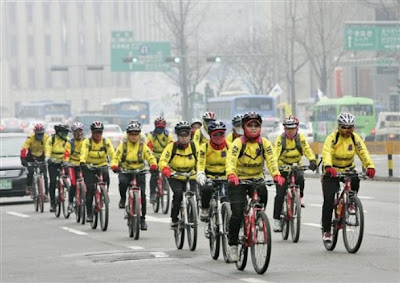 Cycists in South Korea
Photo from AP by Ahn Young-joon
There are many problems with insuring cyclists. "There is also skepticism whether bicycle insurance would work. Insurers may be reluctant to sell the policies due to a relatively high loss ratio. Samsung Fire and Marine Insurance, for example, launched a product for bicycle riders in 1997, but suspended it after a few years due to growing insurance money payouts... Though bicycles are more vulnerable to accidents, ascertaining who is responsible for an accident isn't always clear. Since bicycles are not registered, the potential for fraudulent claims is high."

The thought of "cycling insurance" leaves me feeling conflicted. On the one hand, it would be nice to be covered for damage I might do in an accident. On the other hand, one of the wonderful things about riding is getting away from the whole automotive bureaucracy that squeezes so much cash out of so many people. Furthermore, I strongly suspect that if cyclists CAN buy accident insurance in the USA, it will not be long before some lobbyist pushes for a law that requires cyclists to do so.

I completely agree with you. Even mild promotion of bicycle insurance is a bad idea because all it would take is one loud squeaky wheel who's relative got killed by a bicyclist and suddenly bicycle insurance would become law for everyone.

There's really no need for this type of insurance, because the two products relevant to cyclists are already available. Many homeowner's and renter's policies will cover bikes regardless of where they are, assuming that the cost of the bike is greater than the deductible. Most insurance companies also offer personal liability insurance in the case that you injure someone else or their property and they sue you. Comprehensive and collision auto insurance aren't relevant because it would be quite hard for a bike to do more damage to a car than the amount of a typical deductible ($1000). Few cyclists have a bike that they can't "afford" the replace if was a total loss, so there's no need to pay 10% of the value per year to insure it.

I also wouldn't worry too much about this being compulsory like auto insurance-- the overhead so large and margins so thin for this type of insurance that I highly doubt any any insurance company is every going to offer it for anything other than marketing purposes.

Isn't the point of having insurance to mesh with the rest of the system. If you get hit by a car, they won't take you seriously unless you have auto insurance. That is, they expect you to put a bike accident on the car insurance you all ready have. This is at least what I have been told. I find the law and insurance to be a muddle.

Police and the rest of the system do not take a bike getting hit by a car seriously. In order to be, "in the system" some kind of insurance is required.

I think that there are a number of insurances all confused here:

1. Insuring people you hit by a bike. IMHO a waste of time because bikes seldom have killed people in the accident stats.

2. Insuring your bike. Pointless because bikes are cheaper than paperwork.

3. Insuring person if you get hit by a car. Important as this is the most common way cyclists get injured and die. When you get hit by a car, how to do you taken seriously? If you get into an ambulance, they will bill you personally with no recourse to sue the driver. The police are not any help whatsoever-this was true in early 2000's Philly at least. You need someone to get in your corner and pursue this, and to pay the hospital bills. This is what kind of insurance we need.

Finally, on what basis is it stated that a bike is more likely to get into an accident?

Regarding accidents where a payout would be required, the stats show a much lower rate in the cycling world than in the auto world. Lower payouts means more money for insurance companies.

My feeling is that insurance companies are run by people who do not cycle and see bikes as toys. Why insure people's cute little toys?

I don't believe current insurance policy product creation for cyclists is being driven by profit nor by any kind of feeling of public duty.

I'd go for bicycle insurance for various reasons, not least of which is that my homeowner's insurance only covers at a huge deductible (which I cannot lower), and there's no other coverage for loss, especially theft.

I would respectfully dispute that bicycles are cheaper than the paperwork involved, and that insurance companies see them as toys. First, there are plenty of automobiles that are cheaper than my bicycle (and it's only worth about 1500 fully equipped), and they insure them. Second, insurance companies offer things like personal article floaters (or other similar names) to cover things like cameras (yes, even thousand dollar cameras) and waverunners and the like.

For a commuter bicycle, I don't like the idea of dropping another grand or two every time some bonehead pinches my bike. Oh, I definitely am very careful with where (if ever) I leave it, and do lock and all that. Still, things happen, and that's what insurance is for.

I realize that insurance companies might not have enough data to work off of, or the numbers might be pretty unpleasant, and I guess I could live with that. But there are cycle insurance companies (apparently, based on quick 'net search) in the UK and Australia at the least.

Bicycle insurance will never work. In spite of it, cyclists should be made more aware about traffic laws.