In his Wall Street Journal article, "Chinese Still Bike for Life, Not Sport," Hiroko Tabuchi scoops all others with his revelation that, in China, the bicycle is still considered a practical vehicle. It appears those poor, backward folk have not yet realized that the true purpose of a bicycle is to serve as a piece of exercise equipment or a toy.

Have no fear! Companies such as Trek are coming to China's rescue! The big bicycle companies are organizing recreational bike rides and other events designed to show the local people the light. The Olympics also served as a widely viewed showcase for road, track, mountain and BMX racing. Despite soaring gasoline prices, we Westerners may be able to convince China that bicycles are for playing while cars and trucks are for commuting. 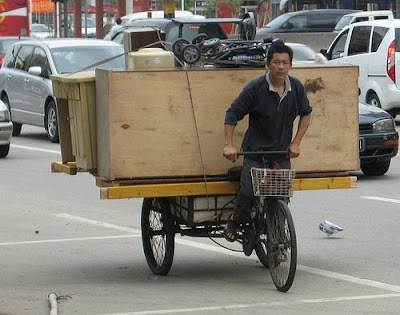 The trike will have to do until he can afford his F350
Alright... I suppose I should get my tongue out of my cheek, but this article really got on my nerves. Tabuchi's position was probably not as demeaning to real-world bicycle riders as I might have suggested. Still, in a world in which bicycles are rapidly gaining popularity as a serious transportation alternative, the Wall Street Journal should wake up and smell the coffee. Bicycles... They're not just for lycra-clad fashionistas anymore.
Posted by Forbes Black at 7:28 PM

I wonder if the Chinese are destined to follow the bikes-as-toys North American model, or is there a chance they'll follow the Northern European model (Dutch, Danish) and have bikes for transport as well as for sport?

You can imagine what my vote would be for :)