Joseph Ahearne and the Bikes He Builds

Joseph Ahearne won the prize for “Best City Bike” at the North American Handmade Bicycle Shows (NAHBS) in 2007 and 2008. In my book, this qualifies him as a maker of bicycle frames for the real world. Some may point out that most people could not or would not pay the prices Ahearne charges for a frame, but I do not think that his prices disqualify him from “real world” status. He is clearly designing and building bicycles meant to be used hard in practical applications, and from what he told me, most of his customers do just that. His designs that involve a “unified bike and rack” push the practicality envelope even further, creating machines that can haul passengers and large amounts of cargo. Finally, I got the distinct impression that Ahearne is a perfectionist. Like virtually all frame builders in this country, he charges the dollars required to build frames to his standards while being able to eek out a modest living. His status as an independent frame builder allows him to create and build designs that no large bicycle company would dare attempt at any price. Considering the two-year waiting list for his creations, lots of people understand that his genius is worth every penny. 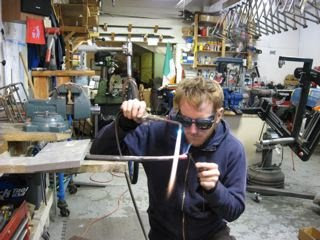 Joseph Ahearne
Q: How did you start building frames? What has kept you in the business?

A: I learned frame building from Tim Paterek. For anyone building bicycle frames he's somewhat of a legend because he wrote the definitive guide for frame construction, "The Paterek Manual." He's an old-school frame builder who, at the time I took his class, lived in Vancouver, Washington. He started building frames in the '70s and for the last ten or so years of his career he taught frame building out of his shop. While taking the class he told me he was retiring from frame building and offered to sell me his equipment and tooling, and I went for it. I've stayed with it for this long because I really enjoy it and I don't want to work for anyone else. Also, because I've got so many things I want to make there's never been a lull, it's just grown and grown to the point that I'm now at, which is about a two-year wait time for bikes.

Q: Is there one type of frame you build more than others?

A: I started out building a lot of 29ers and commuters. I still build both of these, but now I definitely build more commuters and touring bikes and a variety of hybrid styles. The custom racks are really important. Racks can be really difficult to make, but the unified bike and rack, if executed well, is such an awesome thing, both functionally and aesthetically. A lot of people want that. 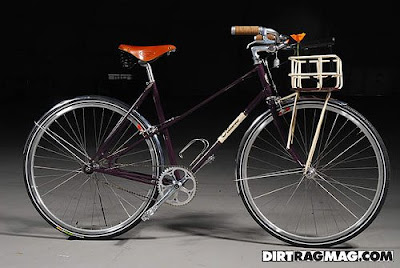 A: There's no such thing, at least not universally. Everyone has different wants and needs and people live in all sorts of places where the terrain is vastly different. No one bike can cover all the possibilities. I guess, if I were only allowed to have one bike for myself, it would be a touring rig with racks front and rear that were easily removable, clearance for fatter tires and fenders, a comfortable, more upright geometry. Kind of like the bike I have that I ride most every day. But, it's even better to have two bikes, or maybe three. That way you can get more specific, and each bike will do its job better.

Q: What is your favorite type of bicycle to build?

A: Usually the one I'm building. Or the one I built last. Or maybe the next one. I really like commuters because they push my skills, make me envision how I want everything to come together and then to come up with the best way to execute it. I learn a lot from each one. But I really like building the simple bikes, too, like fixed gears and single speeds. That way I don't have to think so much about the design and can focus on the perfection of every detail.

Q: I absolutely love this bike: http://www.flickr.com/photos/bikeportland/553993572/. Is there a story behind it? Is it one of your personal bikes? Tell us a bit about it, please. 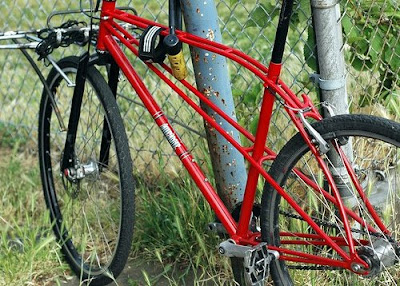 The bike I absolutely love.
Photo courtesy of Bike Portland with some rights reserved
A: This was a big experiment. I started the bike with the idea that I wanted to be able to carry my u-lock on the bike, no rattling. I hate that sound. That's where the twin top tubes came from. From there evolved the crazy seat binder idea, to sandwich the seat tube between the twin tubes and then slot it front and back and put a binder on either side, kind of hidden. I wanted a 5 - piece seat stay configuration, and I stole the bullet-capped stays off an old frame that I broke, but that didn't work out. So I tried a little different configuration, didn't like it, built another style, but didn't like that either. By this time I was getting frustrated and the project was taking far too long, so I built the crazy stays that are now on there. They looked just weird enough, and they fit the way I wanted them to, so I used them. When I first built the frame it didn't have the mixte stays running back from the head tube to the rear dropouts. It just had the twin top tubes. Unfortunately I sent it off to the painter before building the bike up and riding it. When experimenting like this, I should know better. When the bike came back from paint I assembled it with parts and got on to ride and it was terrible. There was way too much flex in the twin top tubes. Talk about a noodle. So then almost immediately I burned off the paint and installed the two mixte stays. This time, after the mixte stays were put in, I built it back up with all the parts and rode it. It felt great, not too much flex. And the mixte stays made the bike all the more strange, but somehow it seems appropriate. The first paint job was white. I wasn't sold on it, and didn't really like it, and with the two extra tubes the bike really wasn't meant to be white. When I sent it back to the painter I knew the bike needed to be blood red. 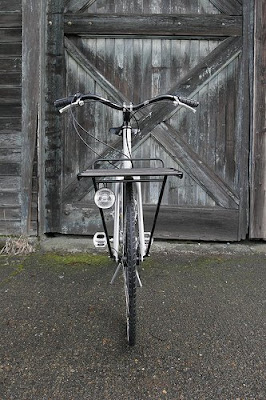 Another beautiful Ahearne commuter
Q: Your website tells us that a customer should expect to wait 18 months from ordering until delivery. Is that because you have a long waiting list? How long does it typically take you to build a bike? Any plans on expanding your operation so you could build more frames in shorter periods of time?

A: My wait is actually about two years now. Yes, that's because I have a lot of orders, at least for me it seems like a lot. A basic frame build may take a week or week and a half frame and fork. It all depends. But some of the more elaborate projects, like the commuters with everything – frame, fork, stem, racks, fenders parts -- can take quite a long time, maybe three weeks to a month. It really depends on a lot of things. Also, polished stainless steel projects are very time and labor intensive. I've got some ideas about how to speed things up, and am always thinking of ways to refine my processes. I'm certainly able to build more quickly now than I was even a year ago. But some things just take time. 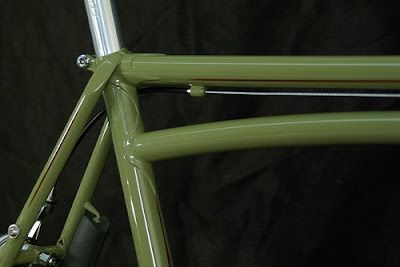 A: Yes, money is always a struggle. I don't think people realize how much goes into building a bike. Bikes for sale in bike shops have people believing that that's what a bike should cost. Which is frustrating. It's kind of like going to the supermarket and buying a pretty package of meat. If you don't educate yourself a little you have no idea the blood required to get it in the package. I think Sacha of Vanilla Bikes has it right when he compares what frame builders make to what plumbers make. If you think about it, we're both (bike builders and plumbers) utilizing some similar techniques. We're putting tubes together, albeit for very different purposes. How much do plumbers make? Something like $75 per hour. There are maybe two frame builders in the history of frame building that make that much on a consistent basis. That's what's frustrating. You can't go buy your pre-fab plumbing at the store at a 10th of the cost, so you've got to pay the $75 or whatever per hour. Not so with bikes. And like I said, both plumbers and frame builders are putting tubes together to make something useful, but what frame builders are doing is infinitely more beautiful. But we are all struggling to make a living. If I weren't so mindlessly stubborn, and willing to live without buying typical American luxuries, I wouldn't be able to do this. For example, I really wouldn't be able to afford to buy a new car. Not unless I wanted to live in it an push it around. Lucky for me, I don't want a new car.

Q: Are there any exciting new projects you are working on? Care to share the details (please, oh please!)?

A: I just sent a bike to the powder coater that, once finished, should be one of the most eye-catching and almost shockingly beautiful bikes I've built. It has a lot of polished stainless steel, all the way around, and is getting a really fancy paint job. A real piece of jewelry for a guy who's called this his "mid-life crisis bike." I put a lot of time into it and am really excited to see it once the powder coater’s magic has happened. Fortunately, I'm certain that this guy is going to ride the bike hard instead of hanging it on a wall and looking at it. I fear that some people do that, but not this one. There will be pictures posted when it's built. It's a crazy machine. 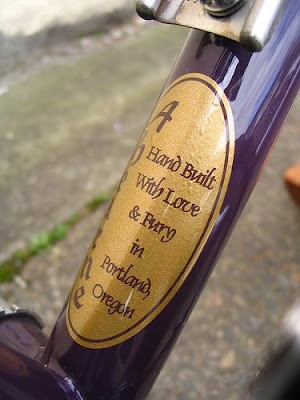 Made with "love and fury." What more could you ask?
Q: What else would you like to say?

A: Almost every day I make a giant smoothie. It's great this time of year because I can ride out to one of the local farms and pick the berries myself. I just went yesterday and picked a whole flat of raspberries. Next week or the week after starts the first wave of early blueberries. There's nothing better in the morning.

Is there a direct correlation between the fantastic beer and great bikes in Portland? I've got to get there someday.