After visiting China for almost two weeks last Spring, I flew to Taiwan for a few days. The differences in transportation choices were striking. In China, most people used bicycles or e-bikes. In Taiwan, the vehicle of choice seemed to be the gasoline-powered scooter.

The city of Tainan is doing its part to change this situation by requiring city workers to ride their bicycles, walk or take public transportation to work every Friday. A story in the China Post states that this is "an effort to conserve energy and cut carbon emissions." 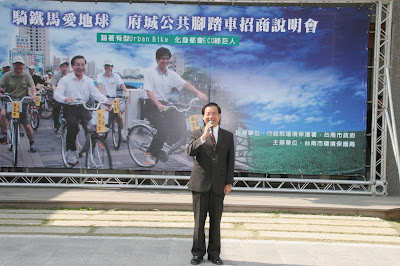 Government official in Tainan, Taiwan
The measure is meeting some resistance from city workers. "Those who said they will have difficulty cited reasons such as frequent bicycle thefts, lack of bus stops near their homes, the need to use cars to transport their children to and from school, long distances to the city government offices and the inability to ride a bicycle."

Some female workers also expressed concern regarding their personal safety.

Requiring people to stop driving gasoline-powered vehicles may seem to be a drastic measure. In doing so, the city government in Tainan is recognizing that the problems caused by our dependence on fossil fuels need to be addressed before they cause an irreversible crisis. Cycloculture applauds the bravery of the government officials who made this decision.

I travel between China and Taiwan often, and I am so happy this is happening. Gas powered scooters are the bane of Taiwan. Without them the air would be so much better. It makes me sad that the solution the masses take is buying masks. Talk about addressing the symptoms and not the cause.
The Chinese govt should be applauded for stopping new registrations of gas powered scooters, thereby pushing the market toward the electrics. You can walk into any large supermarket and buy an electric scooter. Granted China now has millions of lead acid batteries that need to be dealt with sooner of later, but the govt has shown it has the resolve to push reforms through at a speedy pace.
All in all this is a brave move by the Tainan government, and lets hope it spreads all over Taiwan.