Surly has been quietly revolutionizing the bicycle world since 1999. Strangely, they have been doing this revolutionizing through the use of practical frame designs and that exotic frame material, steel. From street bikes to off-road bikes to bikes that do anything and everything, Surly offers something for everyone who views a bicycle as more than a toy, a status symbol or a piece of exercise equipment.

A few years back, I e-mailed Surly. I laid out all the economic reasons why they should build a 68cm road frame. I stated my case in an organized manner, then I begged, pleaded, groveled, etc. Shortly thereafter, I got an e-mail back from Surly’s Andy Corson. He complimented me on the structure of my request and politely said “No.”

We had such a nice dialogue around that issue that I have pinged Andy every now and then since our original conversation, asking him questions on the bicycle industry and generally getting his take on various bicycle-oriented situations. He has always been prompt, helpful and insightful, so I figured he might have some interesting things to say for Cycloculture. 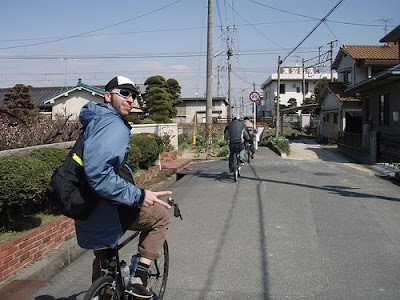 Andy Corson, practicing what he preaches

Q: What is your official title at Surly?

A: Marketing “Manager.” That’s with the quote marks, although you could place them on either word for equal irony.

Q: Forget, for the moment, about marketability and other mundane concerns. If you could design and produce any bike you wanted to, what would it look like? Ride like? Be like?

A: Honestly, it wouldn’t be that much different from many Surly models. That may sound corny, but I started working for Surly in large part because their designs and approach made more sense to me than most of the other stuff that was and still is out there. I like fenders and big tires. I like steel for a lot of reasons, not the least of which is the ride quality. And I like versatile designs that allow some significant personalization. Although not everyone will build a unique frankenbike, with a Surly the option is there.

Q: There seems to be a movement toward front-loaded carriers on bicycles these days. Any thoughts on that trend?

A: I assume you’re talking about platforms or front baskets, as opposed to front ‘low rider’ racks and panniers. Most front carriers are add-ons, and they ride crappy when you throw any kind of weight on since they’re generally connected to the bar and fork, and ride high. Some companies alter the geometry of the frame to help accommodate compromised steering with this sort of front platform. Others connect the basket or platform to the frame instead of the bar and fork. I don’t have anything against front carriers, but I don’t use them either. With so many other options that work so well without a specific frame, I don’t find them compellingly useful.

However, front loaders are part of a larger trend that seems to be growing, a trend of people exploring options and investing in technology to haul stuff by pedal power. From handlebar bags to entire cargo-dedicated bikes and frames, I can’t remember a time when there was such a range of offerings for hauling stuff on your bike. And that is the real point I’m trying to make here: it doesn’t really matter if I personally like front racks, because each option has it’s pros and cons and what works for me may not for someone else. What matters is that there are options and an awareness of the possibility of using one’s bike for more than a Sunday cruise. 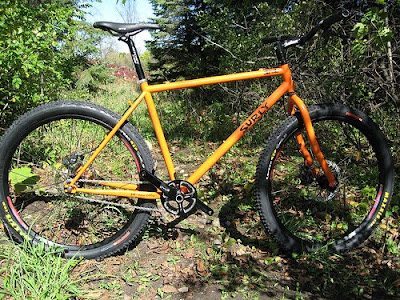 Are dérailleurs for wusses? You decide...

Q: What's the main difference between a Surly and a custom-made steel frame?

A: Custom stuff is custom. Surly produces some very fine quality frames but they are production frames. When you buy a Surly frame or bike you don’t get a lighter or heavier tubeset to match your weight and riding style. You don’t get geometry designed just for you. You don’t get to pick your paint color, or have your name put on the top tube. There can be some real advantages to buying custom, especially if you don’t fit standard frames, or if you’re an advanced-enough rider to notice and benefit from custom spec’d tubing and geometry. Or if you want a lugged frame.

Most people are not going to benefit in any real way from a custom frame, however, as a lot of the benefits are relatively small in the larger scope of what makes a frame good or bad for you. Buying a custom frame is partly about getting the perfect bike to ride and partly about getting the perfect bike to show off. Both are legitimate reasons I suppose.

Q: Any chance Surly could ever build bikes in the ? Or is that just not possible given the economic reality of today's global economy?

A: It is doubtful. We’ve had stuff produced in the , and have checked domestic manufacturing pricing on many items. We’ve run into lots of issues and plan to stay with our manufacturers in . The majority of the world’s bicycle frames and parts are produced here, and having that center of infrastructure lowers pricing on everything quite a bit. A lot of people want domestically produced stuff but simply are not willing to pay for it.

However, it isn’t just pricing. We’re happy with the quality of the work our builders put out. In fact we feel it’s on par with, and in some cases better than, frames costing quite a bit more. We work closely with our agent and manufacturers. This allows us great control over the process and quality of the stuff being produced. It also means we personally know not just the managers of these firms, but the employees as well, the people welding the frames. We see where and how they work.

When we have investigated domestic manufacturing, we have found the same obstacles repeatedly: pricing is much higher, quality is no better and sometimes worse, supply chains are spottier. There are a few places that might be able to do what we want, but I doubt we could keep our prices even close to what they are, and that would fundamentally change the sort of company we are and the stuff we could offer. 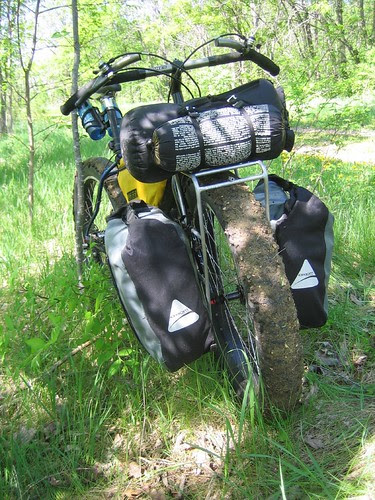 Could there possibly be anything cooler than a muddy Pugsley?

Q: Do you commute by bike or by car (or by something else)?

A: Both. I drive sometimes, I ride sometimes. I’m o.k. with having and using a car, just not for everything. I’ve noticed that there are people who will try to make me feel guilty for this, but outside of the insulated world of bike geekery, I think it is representative of a challenge most people are faced with. The fact is that most people are not going to completely give up their cars because it is impractical. Using a car isn’t fundamentally bad, but using it for everything is equally impractical.

Q: Is the bicycle a practical vehicle in cold, snowy climes such as ?

A: Sure. A bike is arguably better in an urban winter environment, since you can avoid a lot of the traffic tangles that sprout up when the weather gets bad. Cars can’t.

Snow is an issue no matter what. You have to have skills to safely drive a car on snow and ice, and you have to have skills on a bike too. I find riding in winter less stressful than driving. Cars do not require the level of confidence that bikes do, though. It can be a hard argument convincing people they can ride in winter. But then I look out the window and see the guy who rides past my house every day on a cheap walmart-type bike, wearing regular clothes. No studded tires, no wind shell, no special gloves. ‘Nuff said.

Q: Can you give me an idea of Surly's basic design and/or corporate philosophy in a few sentences?

A: We design and produce no bullshit bike stuff that works like it is supposed to, that’s durable, practical, and versatile. Our stuff is meant to be used every day. We don’t do anything just because someone else is doing it, whether it’s a business decision or a product. 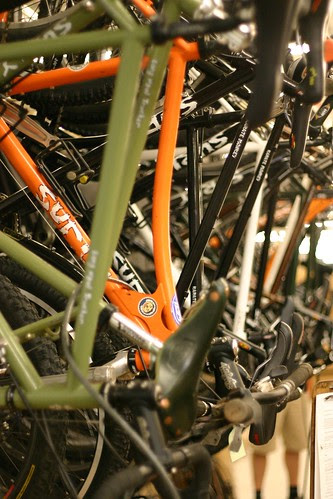 A dizzying array of wonderful bikes

Q: Does Surly have anything new and exciting coming out in the near future?

(Editor’s Note: $%&*#@!!! Guess Cycloculture is going to have to grow a bit before we get scoops like this…)

Q: Do you have something against big dummies? Keep in mind that I am 6'6", and I know where you work.

A: Why, because we don’t produce an XXL Big Dummy frame? Maybe you could use one as a unicycle.

A: This morning I had raisin bran with rice milk. Pretty good, but a meatball and bacon sandwich would be better.

I already read this interview once, but for some reason my browser indicated I hadn't read it yet, so I re-read it. And of course, even though I'd already read it I read it all the way through...

bacon and meatball sandwich indeed. No wonder I ride a big dummy