From a distance, Civia bicycles look like practical, sturdy products with full fenders, chain guards and internally geared hubs. Only when one looks more closely do the subtle touches become apparent - leather saddles, bamboo fenders and slight curves to some of the frame tubes which give these bikes graceful lines. When inspected closely, it becomes obvious that Civias are not cookey-cutter transportation units. They were designed and "spec'd" by people who love bicycles and appreciate both form and function.

I wanted to know more, so I contacted the company. Scott Thayer, Civia's general manager, was kind enough to grant me an interview. Note that Civia Cycles is one of the bicycle companies operated by Quality Bicycle Products in Bloomington, Minnesota, so this interview constitutes the second installment in Cycloculture's series on bicycle companies from the greater Minneapolis area. 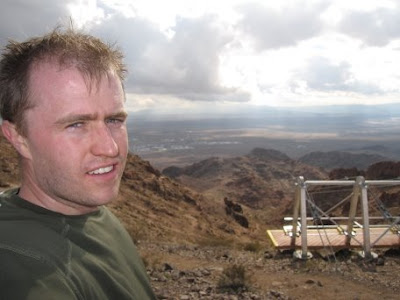 Scott Thayer at the top of the Bootleg Canyon Downhill runs in Boulder City, NV
Photo by Scott Thayer
Q: Who came up with the idea for Civia?
A: The idea for a transportation focused brand came from the employees of Quality Bicycle Products. After coming back from Interbike 2006, a few employees were recounting trends they saw and commuting and transportation kept coming up. We realized that many brands were starting to offer more commuting options, but few were devoting design and engineering resources to it. They would simply repurpose existing products as their new commuter.

We wanted to bring the attention to detail and engineering to transportation that was being allocated to road and mountain products. 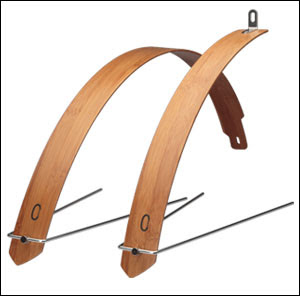 Bamboo fenders from the Civia Loring
Photo courtesy of Civia Cycles
Q: The Loring just screams practicality. It looks like a "world bike" with modern features such as disc brakes. Can you tell me a bit about the evolution of that design? How are those bamboo fenders working out?
A: Our product design process starts out with defining who the user is going to be and identifying their experience. With the Loring, we see the user being someone that is running shorter errands or just out and about enjoying the day. They want to be able to carry things with them and not necessarily have to have planned for it by bringing a bag in advance. This is also a bike that could serve as a family bike with multiple riders.

From this scenario, we developed a bike with a comfortable, upright riding position, a practical, well-balanced front basket, a two leg kickstand for loading stability and gave the frame plenty of standover height for easy on and off. We wanted to do something fun with the details, so we went with bamboo for the racks' decking as well as the bamboo fenders. The design of the bike and the bamboo have definitely caught people's attention, as it stopped them in their tracks at Interbike. 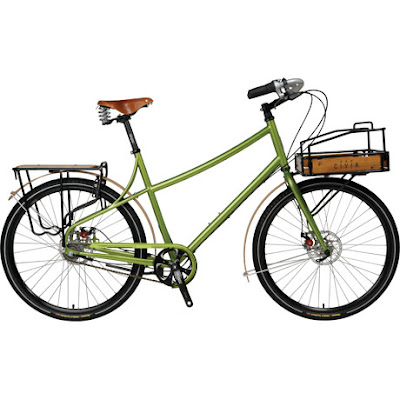 Civia Loring
Photo courtesty of Civia Cyles
Q: Gas prices are up! Gas prices are down! Do you see the sales numbers for your bicycles move with gas prices? If so, what is the relationship?
A: We've been selling Civia product for the last 10 months. It's hard to correlate our sales growth with gas prices going up, since we launched at the time prices were starting to spike and winter coincided with them dropping. Anecdotally, we definitely noticed more people riding and strong sales with gas prices up. It's hard to know if sales have slowed due to gas prices falling, it being the middle of winter, and the economy in the tank. It's likely a combo of all three. I'm anticipating sales to pick up once spring hits, as people got into the mindset of saving money on gas by riding their bikes when fuel spiked. I bet they will continue to look for ways to be frugal in this current economic state. Bike riding is a great way to do that. 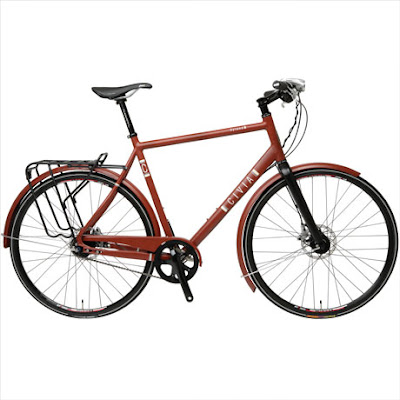 Civia Hyland
Photo courtesy of Civia Cycles
Q: Tell us about the bicycle scene in the Minneapolis area, please. There are so many people running bicycle-related businesses there, it seems as though Minneapolis has become a magnet for bicycle folks. Any thoughts as to why Minneapolis has become such a center for the US bicycle industry? Is bicycle culture part of the overall urban culture in the Twin Cities, or is it limited to a smallish group of bicycle people?
A: The bicycle scene in Minneapolis is strong and it's growing. The success of our scene is a great mix of passionate riders, selfless advocates and friends in political office. One thing I've always appreciated about the Twin Cities is how active its residents are. Spring through fall, people are outside enjoying the great weather that we have and when winter rolls around, the outdoor activities simply change to skiing, ice skating, sledding and jogging. Because of this level of activity, we have great park systems and trail connections that allow people to easily bike throughout the city. We have a growing network of dedicated bike lanes and trails. Part of this comes from a federal grant we received, and part of it comes from the support of influential politicians, such as Minneapolis mayor, R.T. Rybak, himself an avid cyclist. We also have a strong bicycle industry comprised of a mix of retail, wholesale and manufacturers that is vocal about biking.

Q: Are there any new Civia models coming out soon? If so, could you tell us a bit about them?
A: Our two models are the Hyland (700c flat bar road bike) and the Loring (26" swept back upright). We're just starting to look ahead at what's next. We've got a couple ideas that we'll be flushing out. Right now, we're not at a place where we're ready to get into details. What I do have is that we'll be displaying our 2010 product at Interbike in September and are targeting a March 2010 availability. 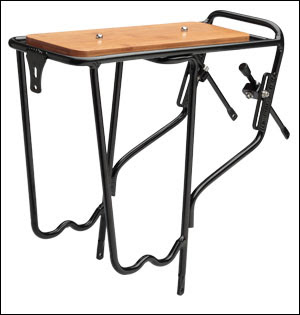 Civia Loring rear rack
Photo courtesy of Civia Cycles
Q: Those Loring front and rear racks with the bamboo slats look "Mm-mm good!" That porteur-style front rack looks especially practical and beautiful. Tell us a bit about them, please. It appears as though these racks are currently available on the Loring bikes, but will not be available separately until June of 2009. Is that correct?
A: The Loring comes in 3 builds. A 9 speed internally geared version that has front and rear rack. A 3 speed internally geared version with both racks and a 3 speed version base model with no racks or fenders. The Lorings will be available for sale in late April and the racks, frame and fork will be available shortly afterwards. We're thinking early June is the soonest we'll have them ready for sale.

Q: What else does Civia have in store for the near future?
A: For the future, we continue to look towards improving the offerings in bicycle transportation. There's so much that can be done to improve on what's out there, our biggest problem is what area to tackle next. 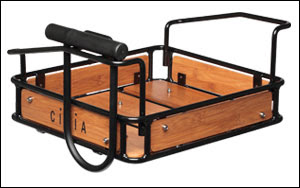 Civia Loring front rack
Photo courtesy of Civia Cycles
Q: What other bicycles do you like?
A: My background in cycling started with road bikes, added mountain bikes, and integrated commuting bikes. My tastes run the gamut. Right now, I'm really enjoying my Litespeed Niota full suspension mountain bike. I'm also a big fan of the current hand built scene. I think it's quite telling that most of the bikes being displayed at NAHBS and being raved about in magazines are variations on transportation bikes. Ultimately, what Civia is trying to do is to bring the hand built passion and style to a larger audience.

Q: What do you like for breakfast?
A: My work day routine is toast with butter and jam accompanied by yogurt and fruit. On the weekend, I sometimes get lucky and my wife will cook eggs, pancakes and veggie sausages. It's fantastic!
Posted by Forbes Black at 12:56 PM