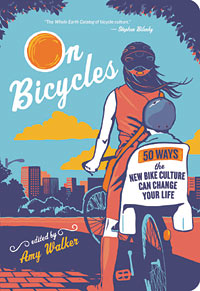 Nitpicking aside, On Bicycles is a great book.  I would recommend it to anyone from a novice rider who just picked up an old Schwinn Varsity at a garage sale, to a seasoned bicycle advocate with decades of experience, and everyone in between.  If you are excited about using your bicycle for transportation, you will find many essays in On Bicycles that inspire you and increase your passion for bikes.
Posted by Forbes Black at 12:27 PM