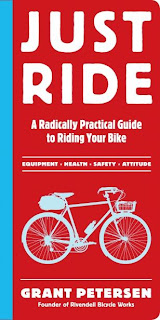 I have always appreciated Grant Petersen’s pragmatic, down-to-earth approach to cycling.  When I read his new book, Just Ride, this appreciation took a step up.  I now regard Petersen as the bicycling “big brother” I never had.  I know the term “Big Brother” has acquired negative connotations since 1984, so I want to make sure readers understand that I am talking about my REAL big brother, not some authoritarian, Orwellian nightmare.  When I was a kid, I could ask my big brother anything, and I knew that he would draw from his huge stores of knowledge and wisdom (he had, after all, been fueling these stores for two whole years longer than I had) and provide me with a simple, straightforward answer geared toward my interests.

Question: “Which would be grosser, eating a handful or lima beans or a handful of worms?”

Answer (after furrowing his brow and rubbing his chin thoughtfully): “Well, they’d both be extremely gross, but at least you could brag about the worms at school the next day, so I‘d go with the worms.”

That is how I view the advice in Petersen’s book.  The cycling world asks him questions, such as “What should I wear when I ride my bike?”  He thinks about is (for decades, in this case) and answers, “Just wear normal clothes, but wear comfortable ones that keep you cool.”  Please note that I am paraphrasing his response, but I think it is a pretty good summation.  In general, Petersen draws up his vast experience with bicycles and bicycling to give us answers that are straightforward, honest and simple.  Readers do not have to agree with everything he says.  I know that I certainly do not, but I respect his integrity and his experience.  He has discovered many bicycle-related things that work well for him, and Just Ride is the soapbox he stands upon to tell the rest of the world what he has learned.

Here are some of Petersen’s pearls of wisdom (paraphrased again):
-         Racing bicycles are not the right bikes for most riders
-         Tire clearance is important
-         Helmets do not make riders invincible
-         Your bicycle should have both a bell and a kickstand
-         You should dress like a desert dweller when riding your bicycle
-         Bicycle saddles do not, in general, cause impotence

Petersen’s wisdom does not stop there, not by a long shot.  He discusses many more topics and explains his opinions in great detail, but I do not want to give too much away and spoil the book for those who have not yet read it.  The only extra point I want to add here is in regards to Petersen’s search for good, long-sleeved seersucker shirts.  I have found that LL Bean (llbean.com) carries wonderful seersucker shirts in the Spring and Summer.  They are not cheap, especially in tall sizes, but they do have long sleeves, they are light and extremely comfortable, and they make fantastic cycling apparel when worn over a T-shirt or just by themselves.
Of course, I did not agree with everything my real big brother said when we were kids, and some of Petersen’s advice in Just Ride does not seem like it would work for me either.  For instance, Petersen is a proponent of a “low carb” diet.  I have seen low carb diets come and go for many decades, starting with my father’s attempt at going low carb back in the early 1970s.  In every case that I have witnessed, the low carb dieter loses lots of weight in the first few weeks, begins to look and feel weak and listless as time progresses, and eventually gives up on the effort after a month or two.  I remember my mother, who is a registered nurse, was so alarmed by my father’s appearance and lack of energy, that she put him on a regime of nutritional supplements before he eventually gave up on the whole ordeal.

Don’t get me wrong, here.  Petersen has found a diet that works for him, and by all accounts he is a very healthy, extremely active person.  I applaud him for his diligence and wish him the best.  I also imagine that there will be readers for whom his dietary advice works perfectly.  I am just not one of them.  Petersen and I had a good discussion about diet, exercise and other issues.  See my recent interview with him for more details.

Another disconnect I have with the book is Petersen’s suggestion that cycling may not be the best way to lose weight and keep it off.  My personal experience is that, if I ride at least four days per week, even if I average less than twenty miles per day, my weight goes down and stays down.  I talked to Petersen about this as well, and his answer was, essentially, “Do what works for you,” which always strikes me as the best answer to most questions.  See my interview withPetersen for elaboration.

Nitpicking aside, I agree with almost everything Petersen says in his book.  Just Ride is a compendium of common sense meeting up with decades of real-world experience.  However, it is not for everyone.  If you want your bicycle to be a symbol of your technological superiority over everyone you know, you will hate Petersen’s practical advice about simple, low-tech steel bicycles.  If you think that only racers are “serious” bicyclers, you will hate Petersen’s assertions that racing is “ruining the breed.”  If you want to use bicycling as an excuse to get an entirely new, expensive wardrobe, you will not want to read Petersen’s recommendations that you ride in clothes that you could wear anywhere without being embarrassed.  Finally and most importantly, if you want bicycling to be complicated, punishing work, you will hate Petersen’s  advice that we all ride for the sheer joy of riding.  If, on the other hand, you are looking for advice on how to make bicycling an enjoyable pastime that will make you happy well into your sunset years, then just read.
Posted by Forbes Black at 6:06 PM