Fifteen Days in the Belly of the Beast

Over at the Kogswell Owners Group (KOG), there was a recent discussion about the “Yo Eddy” fork, manufactured by the late, great Fat City Cycles.

It was generally agreed that this is a very good bicycle fork design. It was also agreed that this was a difficult fork to manufacture. There are many parts which require complex metal-forming and precise alignment before welding or brazing. Still, Kogswell owner Matthew Grimm is moving forward with producing this fork for a version of the Porteur/Randonneur (P/R). This is great news! Many people were surprised that Kogswell could manufacture this fork within the budget of the reasonably priced bicycles they produce. 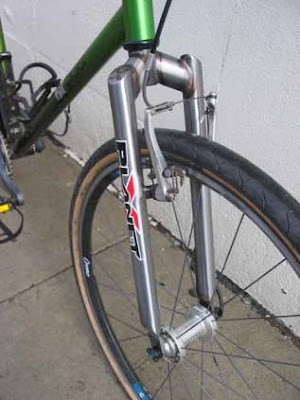 A "Yo Eddy"-style fork by Planet X (no relation to Factory X)
Now let me tell you about a factory in I recently visited. Let’s call it Factory X. Factory X builds Yo Eddy-style forks in a mass-production environment. This factory has well-designed fixtures that hold the tight alignments required. From what I could see, I estimate that 75% of the welds from this manufacturer would have passed inspection at Fat City. The other 25% would still have been an improvement over what consumers saw on Diamond Backs and Univegas from the 1980s.
Factory X builds these forks for bicycles which they sell directly to big-box retailers. The bicycle which uses these forks sells for around $80 at Walmart. Oh, and they make more than 2000 of them every day, six days each week, throughout the year. 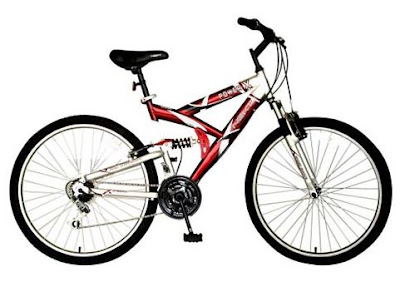 A "Next" brand bicycle, available at Walmart and built by "Factory X," with a"Yo Eddy"-style fork cleverly disguised to look like a suspension fork
Don’t get me wrong here. The P/R is vastly superior to any bicycle produced in this factory. At $600 for frame, fork, fenders and assorted goodies, the P/R is one of the most amazing bargains in the bicycle universe, and the Yo Eddy-style fork will make it even better. Kogswell’s fork will likely use custom drawn cro-moly tubing with very nice droupouts. The fork from Factory X, in sharp contrast, is made from high-tensile steel and the dropouts are stamped into the same pieces of tubing which form the fork blades.
That said, Factory X builds this fork, and all of their other products, to extremely high quality standards, given their financial constraints and the jaw-droppingly large quantities they build. They employ dozens each of highly trained welders, machinists and assemblers, most of whom could walk into an operation of similar caliber to Fat City and immediately start building products to the highest quality standards imaginable. Factory X is spread over four enormous buildings co-located on one industrial campus. It produces more than 900,000 bicycles per year presently, but the owner of the factory assured me that they could easily boost production to 1.3 million units using their current resources. Of course, if they “tap out” their current capacity, they have many, many acres on their lot to build more facilities.
During my business trip, I visited eleven bicycle factories in and . Factory X was the second largest factory I saw. The largest factory was a self-contained citadel as well as a manufacturing center. Its total manufacturing capacity greatly exceeded that of Factory X. It could form steel or aluminum into nearly any desired shape, then heat treat the material any way imaginable after welding. Many of the workers lived in on-site dormitories.

"Factory X," located near Nanjing, China
On the other side of the spectrum, I was dragged through a small factory producing the cheesy cruiser-style bicycles one frequently sees advertised on Craigslist. I was visiting a components maker, and I suppose he owed the factory owner a favor, so he offered me up as a potential buyer from a big American company. I was not interested in anything that factory built. However, when I compare this relatively modest manufacturing plant to my tour of Huffy HQ in back in 1998, the awesome scope of Chinese bicycle manufacturing becomes even more clear. The most humble factory I saw on my trip produced goods of far higher quality than anything Huffy produced ten years ago.
In between these two extremes, I saw everything from well-established factories building high-end equipment for some of the biggest names in the bike business to small companies producing less than one thousand specialty bicycles each month. I did not see any sweat shops. I got the distinct feeling that, because of the manufacturing boom occurring in , most of the workers were able to demand fairly good working conditions. If they did not get them at one factory, there were plenty of other factories hiring. 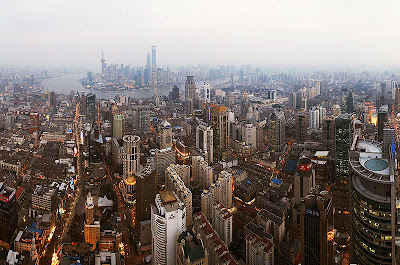 The Shanghai skyline, the heart of China's economic revolution
Perhaps I was imagining it, but I also thought I saw a sense of cooperation and mutual purpose amongst the workers in the Chinese factories that was distinctly lacking in various American factories I have visited. In a former professional life, I spent a fair amount of time in GM and Ford plants. The union workers I encountered in these plants seemed determined to make as much money as possible, a trait they shared with their Chinese counterparts I observed on my trip. However, the American union workers also seemed determined to return as little work as possible for the money they were paid. This contrasted sharply to the attitude of the Chinese workers, who seemed to understand that when the company made more money, they could make more money. Workers and management seemed united in a capitalistic profit frenzy which resulted in efficient workers being given what they needed to get their jobs done as well and quickly as possible.
I was also surprised by the level of technological sophistication that complimented the “good, old fashioned” manufacturing fundamentals I saw at the factories in . The well trained, professional employees were supplemented by rows of robotic welders, CNC machines, automated test equipment and other technologically sophisticated equipment which were set up, monitored and maintained by many experts in the various technological fields. The efficient work-flow patterns were made even better by elaborate conveyor systems which took parts wherever they needed to go. In addition to excellent execution of basic manufacturing techniques, certain factories employed “cutting edge” processes as well, such as aluminum brazing. I saw a combination of old and new. These factories did whatever made sense to build the best products at the lowest prices. In China, they know how to build bikes for the real world
It is difficult to express in words how seeing these remarkable manufacturing centers made me feel. I was filled with a combination of awe, fear and hopefulness. I was awed to see such amazing manufacturing abilities applied on such huge scales (not to mention small and mid-sized scales). I was fearful that ’s incredible manufacturing might will allow them to increasingly “eat our lunch,” economically speaking, over the next several decades. While Americans are working in circles, feeding our “service economy,” is building not only material wealth, but the infrastructure required to build exponentially more such wealth in the near future.
But I am also filled with hope. There is nothing inherently superior about ’s ability to build, staff and operate factories. Indeed, they have taken many of their industrial cues from the . American workers have proven that, given the right incentives, they can be as enthusiastic and efficient as anyone on this planet. While it is true that the world economy currently favors goods made in China, this situation will not last forever. Economic balance will be achieved at some point in the future. When it does, and when oil prices and other issues force us to replace our cars with bicycles, I look forward to building millions of them from a state-of-the art manufacturing center near my home.
Posted by Forbes Black at 5:23 PM

Thanks for the essay, Forbes. Very thoughtful, as always. I think our lunch is already being eaten. I don't have an answer for how to change that... :(

Your concerns about people creating "material wealth" eating the lunch of service economy weenies is badly misplaced however. Even China is rapidly shedding manufacturing jobs in favor of service jobs -- enabled by the management and automation you witnessed.

The Chinese know the reason for this. Manufacturing may seem "real", but in world where high volume manufacturing capability is not hard to come by, it not an economically valuable capability. That, roughly, is why we let it go.

When we start to see Chinese designing, distributing, and retailing bikes -- and we will, but not as soon as you might think -- then you can fear for your lunch.

Forbes, a very interesting report. I wish I could have witnessed a few of those factories myself, but I at least have a feel for them thanks to you.

It will be interesting to keep an eye on the quality of goods coming out of China. Bikester might be right, though: The real power might really be in ownership. The factories are physically impressive (and no doubt profitable), but I'm curious how many of the bikes are created for Chinese-owned companies, or distributed by Chinese outfits?

Interesting & insightful.
Those wondering about design & distribution might also remember the size of China's internal market, & also a couple of the Taiwanese success stories at marketing in Europe, North America & Australasia. (KHS & Giant in particular.
China's universities are busy churning out technocrats by the train-load. I agree that self-confidence in their ability to design rather than make is still comparatively low. It is, however, growing. As far back as 2002, Chinese newspaper reports on their auto industry were identifying a marketplace popularity for Chinese designed cars, which were perceived at meeting local needs and wants better than foreign designs (which are, nevertheless, dominant). A taste for locally branded consumer durables from Shinco, Haier, Lenovo, TCL, etc had already seriously challenged the popularity of Sony, LG, etc.
The 2003 Chinese climb of Chomolungma (Everest) was sponsored by Toread, a Chinese outdoors equipment company. Like the recent climb, it was televised live in China, carrying the Toread brand into millions of homes.
When living in China I saw the beginnings of recreational as opposed to utilitarian cycling culture. Watch the film Beijing Bicycle for a taste of this. If that culture translates into even a handful of young Chinese aspiring to be bike designers (& I saw first hand examples of this in a Chinese LBS where the boys were custom assembling very weird bikes for the local youth market) then you have the makings of a complete system from design to retail.