In my first article on Stephen Bilenky, which I based on conversations I had with Bilenky during two phone interviews, I shared some of his thoughts on the bicycles built by Bilenky Cycle Works (BCW) and talked a bit about the history of the company. In this installment, I will focus more on Bilenky’s future plans, his thoughts on the broader bicycle market and his ideas on how bicycles can fit into society. 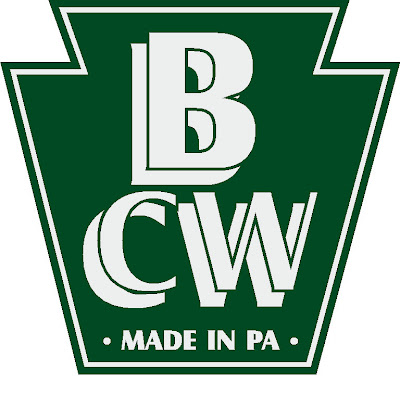 When I asked him about the ideal role of bicycles in today’s transportation picture, he told me about his longtime interest in community design. He sent me a link to a 180-page document on which he was the lead author, entitled, “Community Design for Optimal Energy and Resource Utilization.” Bilenky won a National Science Foundation grant to do the research for this paper while he was a student at Pennsylvania State University. We might conclude that Bilenky has put a considerable amount of thought into this question.

He summed up his ideas by saying, “The ideal is to have a large percentage of short range, routine trips done by bicycle, so gas consumption is reduced and congestion alleviated. The challenge is bringing new cyclists into the ranks of utility cyclists and finding strategies to safely combine street traffic, mass transit, and bicycling. My urban dream development is a network of underground concourses specifically for bike travel so it’s easy and safe to commute easily and safely in all weather conditions, people powered mass transit.”

Not all of us might be thrilled at the idea of riding our bikes underground, but perhaps living in Southern California has made me forget what riding through East Coast winters is like. And you have got to respect someone who dares to “dream big.” I certainly agree with his assertion that, “If it [our transportation infrastructure] is not shaped for cycling, how are people going to surmount the barriers?” 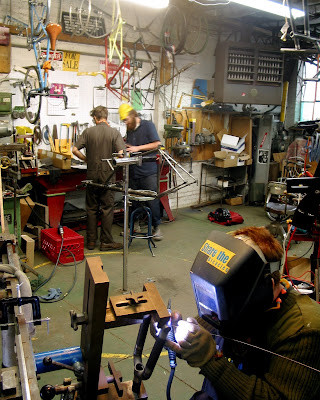 The BCW crew in action
I asked him about his recommendations for off-the-shelf bicycles. “The Somas are nice. The Surlies are okay.” He told me he liked the purpose-built Surlies, such as the Pugsley and Big Dummy. He did opine that the Surlies “are a little heavier than they need to be.”

He also added, “Trek has a lot of decent bikes.”

In terms of used bikes, he told me, “I have a fond spot for late 70s/early 80s Japanese touring bikes. Nishikis, Fujis, Panansonics, some of the early [Asian-built] Raleighs.”

We chatted about the American framebuilders who barely make enough money to survive. I asked him if he thought it would be possible for a USA-based bicycle manufacturer to become profitable enough to pay its employees competitive wages. “There are a lot of ingredients, but a key one is the scale of operations. One to two people have such high overhead that it is hard to make stuff and sell stuff and organize stuff, etc. It would have to be very premium priced.” 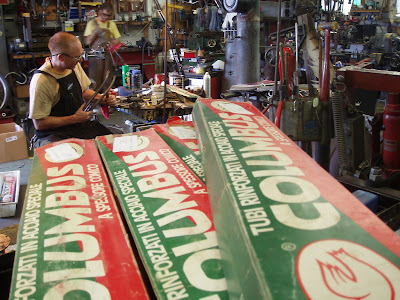 Working with the good stuff...
He talked about bicycle companies such as I.F., Seven or Comotion as being big enough to potentially succeed, while not being too big to maintain manufacturing only in the USA. He pointed at Cannondale as an example of a company that outgrew the viable size limitations and had to outsource some of its production to China after experiencing severe financial problems.

Bilenky is still trying to find the right size for BCW. Currently, there are eight people working for the company, but with demand for BCW products surging, that number might need to grow in the near future. At this point in 2008, they are looking for 50% growth over last year. In the next month or so, they will start production of their biggest batch of cargo bikes ever. They have already sold three times as many cargo bikes in 2008 as they sold in all of 2007. In Europe, the devaluation of the US dollar has made American-made bicycles amazing bargains. BCW has taken advantage of this trend and has gotten good exposure in EU countries.

Additionally, the revolution in electronic communications has left bicycle messengers feeling squeezed. Since important documents can now be scanned and sent via e-mail, messengers must find new services which cannot be provided electronically. One such service is the hauling of cargo. Need to haul twenty reams of copier paper across town? A BCW cargo bike can get your paper there with aplomb. 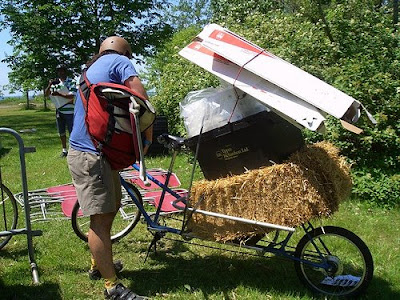 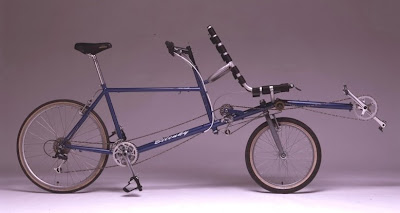 Hi Forbes. Very nice job with the Bilenky interviews. It's great to hear that the market for cargo bikes is growing and if I could just be disciplined enough to save a few extra coins...

One side note - try dropping the word 'extreme' from your writing. You will sound more sober and you may even find it sounds more accurate. I do it in my head all the time when reading the press since that word is so utterly overused these days.

I really like your articles, esp the two on Bilenky. I have a Sterling Metro 5 that I ride nearly every day.

You should configure your blog to advertise RSS updates so those of us with feed readers can subscribe to it.

Big fan of Bilenky and his work. I bought a used Litespeed for the sole intention it become a travel bike (I work overseas). His crew retro-fit with it with S & S couplings. It is the most amazing bike I have. My mom said it best in describing that bike, "That's the best thing you ever bought!"
Thanks BCW!