There is nothing new under the sun. This applies to bicycles as much as any other human endeavor. Those of us who have been around bicycles for a few years understand that the popularity of the bicycle rises and falls through the years and decades. Some of us get recklessly optimistic when there is a surge in bicycle usage. "This time it's really going to stick!" we tell ourselves and others. And, perhaps one day it will.

For a little perspective, read this article by Alison Nowak, writing for the "Southwest Minneapolis Patch." Her piece is a wonderful glimpse into history. It is also, perhaps unintentionally, a telling study on human behaviors. Sure, our bicycles have changes a bit since the 19th Century, but the fundamentals of marketing and salesmanship have remained constant. 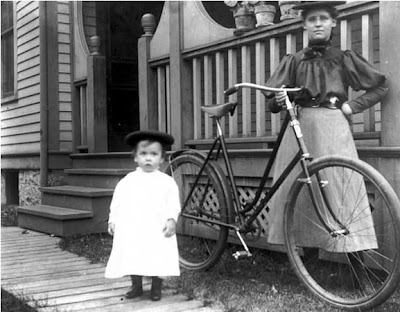 Bicycle fashion circa 1890
Photo courtesy of the Minnesota Historical Society - Credit: Edward Albert Fairbrother
"By the 1890’s bicycle mania had fully taken hold in Minnesota. Throngs of bicycles were seen on the streets of downtown Minneapolis between the years of 1893 and 1897. Many used their bikes as transportation to work, as well as to theater shows and other events downtown." Hmmm... Sounds a lot like modern day Minneapolis, doesn't it?

On a side note, readers who are interested in bicycling history from the 19th Century may wish to take a look at the recently-published book The Lost Cyclist, by David Herlihy. It is a globe-spanning tale of bicycle adventurers during the time period described in Nowak's article.
Posted by Forbes Black at 5:22 PM

Thanks for posting this! I had so much fun writing that article for Patch. I think there's some interesting parallels between people's attitudes towards "safety" bicycles at first and people's current attitudes towards electric bicycles.

Also, can everyone work to bring back the term "scorcher"meaning a person who rides their bike dangerously fast.

FYI, the term "scorcher" has remained as part of bicycle vocabulary over the years. Schwinn has used the "Scorcher" moniker for various models, and companies such as Ibis and ANT have built 1890-style bicycles that they called "scorchers."