Is The BikeShare Movement Gaining Momentum?

This article in the Alexandria Gazette Packet, by Michael Lee Pope, describes the proposed BikeShare program in Alexandria Virginia. This program is based on similar bicycle sharing systems in Washington, DC and Arlington, Virginia. The proposal is receiving strong support from local government officials who look at it as an important tool in fighting traffic congestion. However, it is facing predictable opposition from those who question the validity of spending government dollars to encourage bicycle riding. Poul Hertel, an Alexandria resident, said, "The city can’t afford to put the bus schedule at stops throughout the city but they want to spend $400,000 on this?" 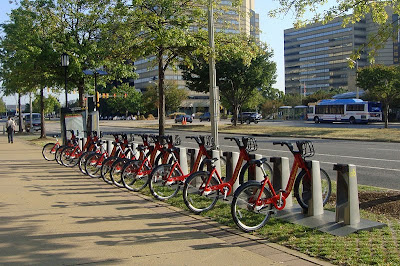 Bicycle sharing station in Arlington, VA
Photo by Mario Roberto Duran Ortiz
Cycloculture applauds the proposal, as well as the courage of those making it. Facing down people who cannot accept the bicycle as a valid piece in our transportation puzzle must be a difficult task, at times. Keep up the good fight!
Posted by Forbes Black at 8:07 AM