Bicycle Use Still Increasing in the Netherlands

For those readers who are metrically challenged, 902 km is 560 miles! Almost 50 miles per month! I am guessing that is... roughly... almost 50 miles per month more than the average American. Furthermore, this figure is dominated by people who use their bicycles as practical vehicles in the real world, not as recreational toys.

According to the article, this trend is driven by rising fuel prices, increasing health awareness, and mounting frustrations over traffic. "Traffic jams in the Netherlands are a major irritation. Dutch commuters travelled a combined 14.7-billion kilometres on bicycles in 2006 compared to 22-billion by public transport and 95.8-billion in cars." 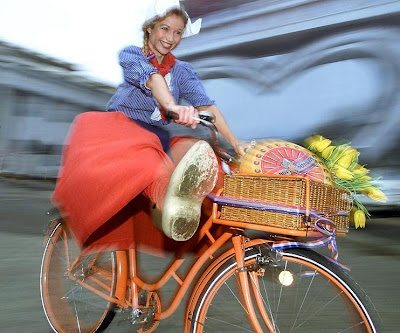 Are wooden-soled biking shoes also making a comeback in Holland?
Image: AFP, from www.motoring.co.za
The article also mentions the surge in popularity of electric bicycles. "The models are becoming more attractive and the technology better. People want to avoid traffic jams and save fuel petrol and cycling 10km to work seems less intimidating with an electric bike."

I am not sure what else to add here, other than "Go Dutch!"
Posted by Forbes Black at 12:16 PM

You have to keep in mind that the infrastructure here (the Netherlands) makes cycling extremely pleasant and extremely efficient, and that it's getting better all the time too.

The importance of the infrastructure is often overlooked by overseas observers.

If you want the same level of cycle usage, you really need the same infrastructure.