No one is going to accuse the "Voice of America" (VOA) of being part of the liberal media, so it is especially encouraging to see this type of media outlet reporting on more Americans bicycling to work. The article starts by stating, "Rising gas prices and a slowing economy are forcing many Americans to leave their cars at home and find alternative methods of transportation." 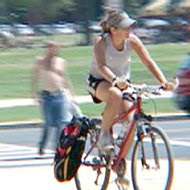 A quintessentially American cyclo-commuter
Whether Americans are "forced" onto bicycles or choose them as clean, healthy transportation options, the mainstreaming of bicycle commuting is a very good thing. After the somewhat negative introduction, the article turns positive as it delves into the environmental benefits of commuting by bicycles. Gary Gardner, a senior researcher with the environmental research organization WorldWatch Institute, is quoted as saying "All of the impacts that we would associate with car use: the pollution impacts, the climate impacts, don't apply to a bicycle so there's not that kind of environmental downside." 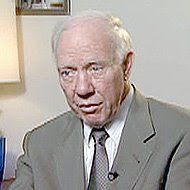 Minnesota Congressman James Oberstar
Not surprisingly, VOA also outlines some of the ways in which the US government is supporting bicycle riders. Minnesota Congressman James Oberstar, Chairman of the Committee on Transportation and Infrastructure in the U.S. House of Representatives, states, "We're transforming the landscape. Cities, counties, state governments, state highway transportation agencies are planning the roadways of the future and planning for bicycle facilities in dense urban areas creating bicycle lanes along with bus lanes and setting aside well marked, well protected paths for bicycling in urban centers and between communities and establishing off-road bicycle paths"

There's always talk of commuters being "forced" to use a bike instead of a car. Bike commentators cringe at cycling being portrayed as the final option for the destitute.

But there is an economic side to the upswing in cycling. It's not a matter of being "forced" - it's a matter of choosing.

Even a financially comfortable commuter can choose to save money on fuel by riding a bike. Choosing to park the car and bike to work is not an act of desperation, given a gritty choice between feeding the car or feeding the kids.

With fuel prices starting their relentless climb, many people are starting to identify car commuting as a luxury that can be traded off for other luxuries. We have a choice of pouring a slice of our disposable income into the car, or keeping it disposable.

I'm sure there are some economic refugees who begrudgingly ride bikes because they have no other choice. But many more have seen the opportunity for some extra free money in their pocket - and have simply chosen to stop wasting so much money.

Well said, Tim. No one is forcing me onto a bike. I enjoy it. It is true that the price of gas, and the fact of a ninety mile daily commute, influenced my decision to become an intermodal (Train/bike) commuter.

I could hace CHOSEN to spend what was then $60 bucks a month (now over $100) more on gas to save a couple of hours a day. But I spend that time catching up on reading, and socializing with the other regulars. I am also loosing weight.