A Tribute to "Forever" Bicycles

Shanghai is embracing "modern life" with what seems to be reckless enthusiasm to an outsider such as myself. Everywhere one looks in that city, one sees new buildings, new cars and a citizenry passionately embracing a new way of life.

So, I took some comfort in seeing an article by Nie Xin in the Shanghai Daily which looked back fondly to the days when "old fashioned" bicycles ruled the roads of this city. 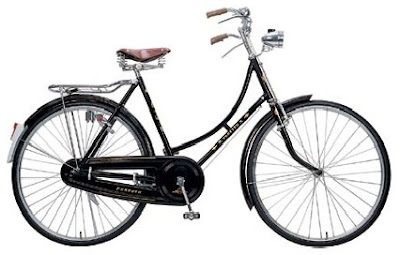 A lovely roadster by the Shanghai Forever Bicycle Company
"For decades, China has been associated with bicycles. Even today, for most foreigners, the image of hundreds of cyclists in the streets still symbolizes the country."

Products made by the "Forever" played a key role in raising the bicycle to the position of dominance it has held for so long in China. The article quotes 57-year-old Gao Guozheng as saying, "About 30 years ago, during the 1970-80s, a Forever men's bike or a Phoenix ladies' bike was one of the must-haves when you wanted to get married. They were regarded as one of the 'old four articles.'" The article goes on to explain, "The other three were a Red Light radio, a Shanghai watch and a Butterfly sewing machine."

The original Forever bicycle model was named "The Iron Anchor." Ah, to live in a society that valued the solidity of a bicycle over such petty concerns as weight...
Posted by Forbes Black at 10:34 AM